A taste of tradition and ancient technique

By Candace Sofianos King | Photos by David Cousin-Marsy.
Nestled in the heart of Saint-Germain-des-Prés in Paris, France, Yoshinori is a new timber-clad gourmet restaurant worth feasting your eyes on.

The 70m² Yoshinori Restaurant has been designed by architectural practitioners Alia Bengana and Atelier BEPG. The space consists of two floors, a ground floor and a basement. Characteristic of the neighbourhood in which it is located, the restaurant boasts a stone and wooden structure, visible wooden beams on the ground floor and vaulted stone cellars in the basement.

The restaurant is headed by owner Yoshinori Morié, a Japanese chef who revels in making gourmet French cuisine while bringing a balance of flavours, presentation and technique to his dishes that are very characteristic of his background. Therefore the vision of the architects was to interpret this cultural blending in the conception of the restaurant.

The architectural team researched an element specific to the Japanese aesthetic culture: the whimsical art of wooden screen panels. This traditional Japanese handwork is based on the repetition of a triangular pattern in which motifs are sometimes inserted, which also communicate meanings and wishes. 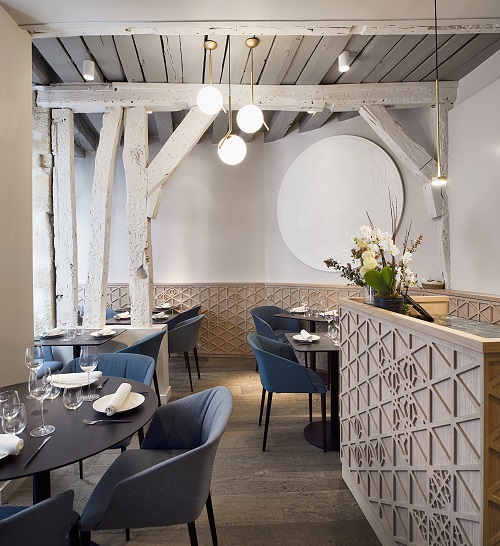 Owned by Japanese chef Yoshinori Morié, the restaurant makes use of inviting timber, including effective and traditional wooden screen panels. 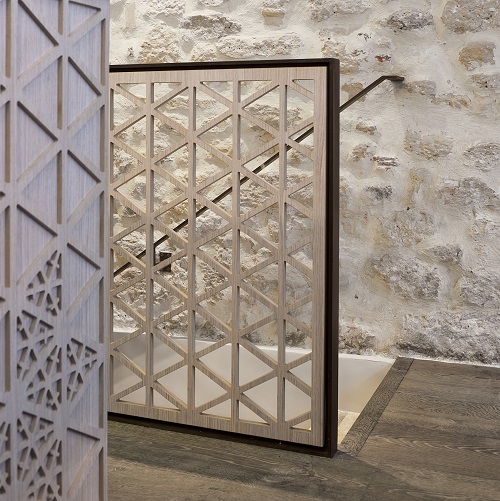 A close-up of the wooden staircase inside Yoshinori.

“The architectural team researched an element specific to the Japanese aesthetic culture: the whimsical art of wooden screen panels.”

This design pattern was then made the central theme of the restaurant’s interior design – it features on the walls of the ground floor, becomes transparent in the stairway railing and changes scale and shape, transforming itself into a diamond motif for the openwork screens and the glasswork of the semi-open kitchen.

The screens have been given a modern update thanks to digital cutting on lightly bleached medium-density fibreboard oak-plated panels. All of the openwork screens, such as the railing and the glasswork in the kitchen and basement, have been inserted into a steel structure that was oxidised to highlight the raw material, which contrasts with the wood’s lace-like quality.

Major construction was carried out to remodel the existing space. There were many demands that had to be met in a space that only measures 70m², which was a former pizzeria. There were to find places for the kitchen equipment, storage, carts, a refrigerated wine rack and, of course, the tables and seats.

The openwork screens, the cornerstone of the project, were crucial in allowing the architects to define spaces and protect passageways and entrances, creating a feeling of intimacy in every corner of the restaurant. And that’s the ancient versatility of timber.