Life among the treetops

There is a longstanding tradition in the architectural profession that when architects and clients collaborate in the context of nature’s purity and beauty, they strive to attain an equal level of perfection. In the case of the distinctive dream-like Paarman Treehouse, conceived by award-winning Malan Vorster Architecture Interior Design, the style is not indulgent but highly restrained. 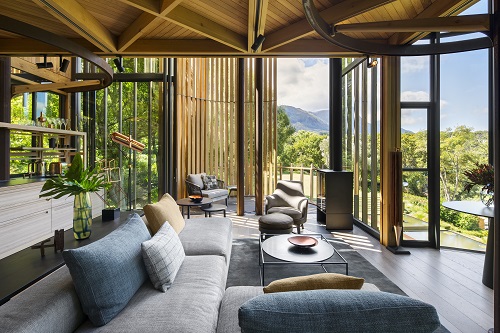 Tucked away on the Paarman family estate in Cape Town’s Constantia, the treehouse is a floating architectural interpretation of a forest. Credit: Adam Letch

Nestled on the picturesque Paarman family estate – of Ina Paarman foodie fame – in the Constantia winelands outside Cape Town, the treehouse is the culmination of Paarman Foods managing director Graham Paarman’s longstanding goal of adding a one-bedroomed, treehouse hide-away to the family estate.

With Malan Vorster Architecture having previously worked with the family on various buildings on the property over the years, Graham, who is also Ina’s son, joined forces again with the firm to create the treehouse. The result? An exquisite floating architectural interpretation of a forest. Raised on pillars, this modern cabin in the woods appears to float above the ground as you enter the glorified treehouse via a suspended timber and weathered steel ramp, which adds to the building’s elevated appeal. Adding to this floating forest aesthetic, the building was placed at the ‘forest edge’, albeit a largely man-made one.

Designed by architects Pieter Malan, Jan-Heyn Vorster and Peter Urry, the Paarman Treehouse’s structure and materials are experienced as fragile and ‘temporary’, while its relationship to place and its immediate context could be perceived as its only sense of permanence. Therefore, the treehouse makes a critically important contribution to the local and international architectural traditions and precedent. Not only is it an addition, but it boasts all the characteristics of becoming one of the benchmarks of quality and inspiration with which contributions of others will be measured.

Both the architect and the client are well aware of the terrains of architectural thinking and physical realisation. There is also a close correlation between the client’s desires for the project and the architect’s interpretation thereof. In such a situation it would also have been very easy to allow absolute indulgence to reign supreme.

However, the complete opposite is true – both the architect and the client display total restraint.  This understatement is thoughtful, measured and subtle, 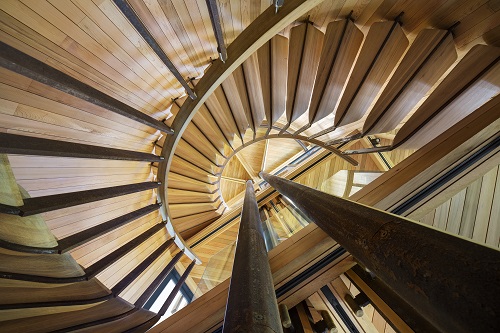 Malan Vorster Architecture consider the staircase to be one of its prime achievements in the design of the treehouse. Credit: Adam Letch

achieving a sense of poetry that is quite unique in global architectural discourse. The architects have taken their cues from some of the master architects who have, throughout time and space, created some of the most iconic and respected structures of this genre.

Malan Vorster Architecture also worked with pure geometric forms. These forms, namely the circle and the square, created the framework for the design – specifically as far as the plan is concerned.  However, they have allowed themselves a wonderful freedom in the sections and elevations of the building. When physically viewed these are, by their very nature, the most dominant and memorable experiences of the building – belying the strict geometrical pattern of the plan.

The building process was outside of the normal conventions of procurement – this largely handmade building was mostly painstakingly created over a relatively long period of time on the site itself. As far as the site conditions and views are concerned, the architects were able to find the most advantageous position, thanks to their previous experience working on the site.

When the building is physically experienced in its context by moving through it, it’s as if the structure as an object and internal space disappears and only its profound relationship to its place on earth remains as the real memory of its physicality. In terms of its structure and materials, the building is experienced as fragile and ‘temporary’. Whereas this unique building could have easily been an expression of personal indulgence, its overriding quality is of restraint and care.

The Paarman Treehouse comprises of essentially three levels – the first level, which leads onto a balcony, features the lounge area, dining room and kitchen. The next level houses the homey bedroom and at the top, an open-air viewing platform and entertainment deck can be found. The living space includes a seating area accompanied with a fireplace and a dining alcove. What adds to the distinctiveness of the structure is the garden setting which creates an atmosphere and climate that will be difficult to find elsewhere.

The cosy bedroom features a glass safety railing that has been added in front of the bed to provide an unobstructed view of the trees. Credit: Adam Letch

According to the builder assigned to the project, Theunis Naude of Theunis Naude Carpentry, the bulk of timber used in the construction of the Paarman Treehouse was western red cedar which boasts exceptional properties and can withstand the harsh elements. Naude notes that the timber used was not treated to achieve a natural weathered look overtime.

“Western red cedar weathers well without being treated and will maintain for many years to come. The timber used in the development wasn’t treated as it has been left to naturally weather, granting it a rustic feel in the long-term. Western red cedar contains a natural oil that assists with the natural preservation of the wood. Spruce wood was used in the beams which was sandwiched in between the cedar so that the spruce timber is not visible,” highlights Naude.

He continues, “Four sets of columns manufactured from corten steel standing on concrete bases form the skeleton around which the whole timber structure is fixed and carried. Corten steel has a higher percentage of copper than normal steel and is not treated nor painted but left to rust. Each set of columns consist of four corten tubes, which have been cut and curved out of flat sheet, giving it a facetted effect, with the two seams on opposite sides being recessed and filled with a western red cedar strip.

“The treads to the staircase are made of computer numerical control (CNC) routered standing laminated oak fixed to corten steel arms protruding from the semi-circular structure. All external window and door frames consist of aluminium and glass, while the entrance and bathroom doors have been made from oak. Engineered oak has also been used for the flooring on the lower as well as the upper level where the bedroom is situated. The top floor and roof is covered with a timber deck made of ipe wood.”

Naude says one of the biggest challenges the team had to contend with was to construct this unique building through the cold months of winter, knowing that they were going to be exposed to all the elements, the worst being rainwater. “We erected a scaffold structure on four sides around the project, about three metres higher than the building’s highest point. We then covered the whole scaffold structure with a canvas sheet, which served its purpose as we lost no construction time due to rain delays. Having said this, the building successfully remained dry.”

Having truly enjoyed working on the project, Naude says the most enlightening thing he learnt during his building experience of the treehouse was that great design and development can be achieved in such a small space.