Meet Norway’s Mjøstårnet, a project that aims to become the tallest timber building in the world. 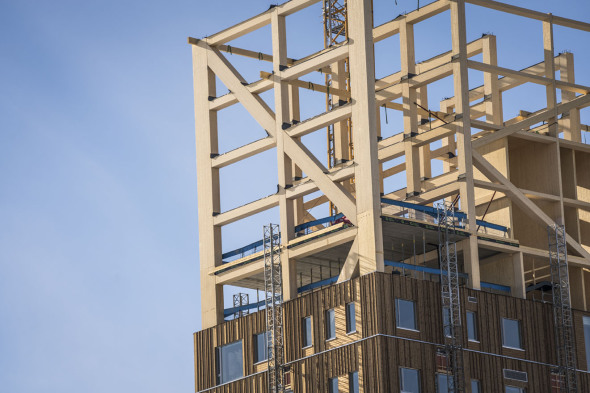 The building is being constructed in five stages without any external scaffolding. Credit: Moelven

As timber gains momentum as a more widely used material in tall buildings, the world’s soon-to-be tallest wooden building is on the rise in Brumunddal, Norway.

Sustainability, competence and the use of local spruce have been key factors in the construction of this architectural marvel, thanks to the ingenuity of Moelven, the Scandinavian construction company behind the project.

With a combined floor area of around 11 300m², the 18-storey building will include apartments, a hotel, offices, restaurants, common areas, as well as a swimming hall of about 4 700m².

Peaking between 80 and 90m high, the structure boasts intriguing anti-fire features – glulam, or glued laminated timber, has been used in the construction as glulam beams don’t burn, says Even Andersen, fire consultant with Sweco Norge AS, the company responsible for fire safety in the building.

“The fire safety measures that have been implemented in Mjøstårnet make the timber building far safer than a corresponding building with a traditional steel and concrete structure. Mjøstårnet is one of the safest buildings along lake Mjøsa, and can withstand even an extensive fire,” highlights Andersen.

He continues, “The glulam structures have such huge dimensions that they retain their load-bearing ability in the event of a burnout fire.”

The glulam structural beams and columns are assembled on the ground, and then fixed in place via a crane. Thereafter the floor slabs are added, and then the external façade.

Finally, the building systems, such as electrical and plumbing, are added to finish each floor. Once Moelven has finished this process for four floors, it moves on to the next four.