WoodEX for Africa, Deck & Flooring Expo: above and beyond

Long established as the gateway to Africa’s timber trade, WoodEX for Africa’s milestone fifth edition, which took place from 11 to 13 July 2018 at Gallagher Convention Centre in Midrand, Johannesburg, alongside the inaugural Deck & Flooring Expo, was a resounding success for all stakeholders and bodes well for the show’s next instalment coming up in 2020.

WoodEX for Africa is the largest exhibition in Africa dedicated exclusively to the timber trade and with the support of strategic industry partners. 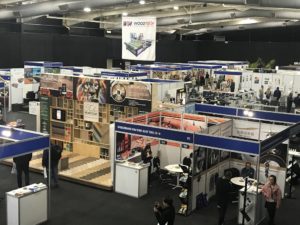 WoodEX for Africa’s milestone fifth edition was a resounding success for all stakeholders and bodes well for the show’s next instalment coming up in 2020. Credit: WFA

A dynamic and lucrative platform in Africa for the public and industry to connect with specialised dealers, stay abreast of the latest industry trends and innovations, secure new business contacts and compare the best deals in the timber trade, WoodEX for Africa 2018 showed almost 100% growth in exhibitors and brands on show compared with 2016.

“Since we launched WoodEX for Africa in 2012, the show has grown robustly year on year and increasingly enjoyed a strong African visitor profile, which makes up a substantial percentage of our international trade visitors this year,” remarks Stephan Jooste, WoodEX for Africa director.

“WoodEX for Africa 2018 was a much larger event than the 2016 show, with almost double the number of brands and exhibitors on show; it also showcased a notably more diverse offering and enjoyed unprecedented exposure to both visitors and exhibitors from close to 30 different countries. This was partly due to the inclusion of the launch edition of the Deck & Flooring Expo, which broadened the horizons of the shows combined and added significant value for exhibitors and visitors alike.”

Visitors are excited to see more of the following in 2020

Survey feedback from exhibitors at the show was overall very positive with more than 70% of exhibitors rating the show as successful, with almost 100% indicating that they gained high quality leads through the show, and the balance saying that the quality of their leads will be ascertained at a later date.

Exhibitors rated the quality of the visitors 7 out of 10, with a 75% likelihood that they would exhibit again in 2020. All exhibitors pointed out a need for a key industry trade show in South Africa that attracts both local and international visitors and a quarter of exhibitors would like to see the conference component reinstated at the show.

In a bid to keep on improving the show, the organisers distributed a survey to visitors to gauge visitor satisfaction and gather insights on how to bring bigger, better shows to the industry in 2020.

An overwhelming 90% of visitors said that they found greater value in attending an industry expo with a wide variety of exhibitors on show under one roof, as compared to an in-house show where only a limited few brands are showcased. Both visitors and exhibitors showed a strong preference for the show to remain a biennial event for reasons including a longer cycle to prepare the highest quality exhibits and release new products to the market.

“Based on both quantitative and qualitative feedback from all our valued stakeholders as well as internal assessments, the milestone fifth instalment of WoodEX for Africa and the launch of the Deck & Flooring Expo were resounding successes, made possible by the immense support the shows enjoyed from all stakeholders including sponsors, show and media partners, exhibitors and visitors,” Jooste remarks.

“While the current economic climate in South Africa has impacted on all business in the country, the turnout at the event and the enthusiasm of all involved reminds us that South Africans are a resilient bunch that do not allow much to get in the way of success. WoodEX for Africa 2018, combined with the Deck & Flooring Expo, represented, yet again, an essential platform for dynamic networking with a high-quality and appropriate audience, which is poised to yield very lucrative business opportunities well into the future,” he concludes.

WoodEX for Africa and the Deck & Flooring Expo will take place again in 2020 at Gallagher Convention Centre in Midrand; dates are to be confirmed.