Many rivers to cross for bridge restoration

Like an aquatic phoenix, the Cape’s historic Milnerton Wooden Bridge and Commodore II shipwreck rise again from their watery grave.

Following a well-planned seven-hour operation, the City of Cape Town’s Environmental Management Department, together with a contractor, removed the last remains of the Commodore II shipwreck from the Diep River in Milnerton in November 2018.

The wreck weighed about 21 tons and is estimated to be about 14m long and 6.8m wide. The wreck (which remained intact throughout the operation) was relocated to City-owned land near the Lagoon Beach Hotel.

Context to the operation 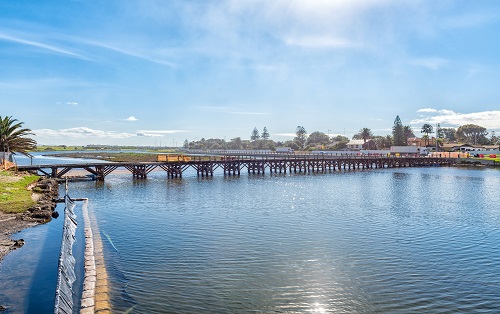 The last remains of the Commodore II shipwreck from the Diep River in Milnerton. Credit: Grobler du Preez

Since the Commodore II shipwreck was uncovered during a winter storm in 2008, there were various attempts to relocate the old lady’s remains as it could pose a danger to boats in the river and it was considered as important historical evidence.

The recent relocation of the Commodore shipwreck was therefore included in the scope of work and budget for the rehabilitation and restoration of the historical Milnerton Wooden Bridge because of its close proximity to the bridge.

During the months of preparations for the operation, the City’s Environmental Management Department had to obtain a permit from the South African Heritage Resources Agency (SAHRA) to allow the relocation because the remains are of a wreck that is more than 60 years old and SAHRA considers it to be worthy of conservation. The Commodore II is seen as archaeological material under the National Heritage Resources Act (NHRA).

A brief history of the Commodore II

The Commodore II was built in 1919 in Seattle in the US. She is believed to have featured in the 1935 American blockbuster film Mutiny on the Bounty, with Clark Gable.

Apart from this, she was also used to ferry coal during World War 2. Shortly after, the grandson of President Paul Kruger bought the schooner and sailed to Buenos Aires in Argentina. It is here where her fortunes seemed took a turn for the worse.

When going up the River Plate, the ship was grounded on a mud bank and the damage to the hull took 40 days to repair. The Commodore II also caught fire but fortunately it was extinguished quickly.

On her return, disaster struck again when the boat was hit by a heavy storm which left the mast, rigging and sails all severely damaged. Emergency repairs led the vessel and crew safely back to Cape Town, where the ship was stripped and the remains left to the mercy of Milnerton’s breakers.

“We believe this is an important part of history which is worth preserving for generations to come. As such, going forward, there will be an information board on the site to educate the public around this schooner and its story,” said Alderman Felicity Purchase, City of Cape Town mayoral committee member for transport and urban development.

The bridge was built in 1901 during the South African War by the Fortress Company of the Royal Engineers – in order to gain military access to the island’s cannon trench. It was declared a National Monument by the old National Monuments Council on 17 July 1987.

The 117-year-old wooden bridge linking Milnerton to Woodbridge Island was the only bridge of its kind in South Africa at the time. It is also a provincial Heritage 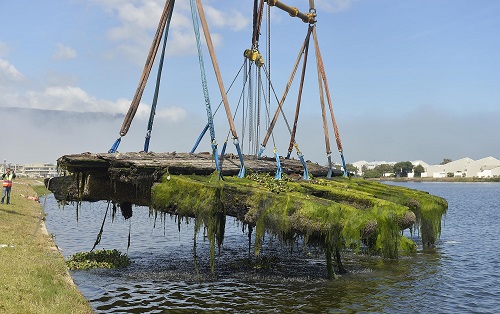 The 117-year-old wooden bridge was the only bridge of its kind in South Africa at the time. Credit: Bruce Sutherland

Site and this status was a key consideration in the decision to restore the bridge. Another reason for the restoration is the City’s concerns about public safety. The bridge spans the Milnerton Lagoon section of the Table Bay Nature Reserve and has been closed since 2007 due to safety concerns.

The process of restoring the 120m-long bridge would involve dismantling and rebuilding it, with some of the repair work taking place under the water.

A project such as this requires very careful planning between the main contractor and Swissline even though there could be any number of unforeseen circumstances during the restoration project which could only technically be discovered during the process. The design would remain the same, except for the addition of an extra handrail, which was needed in terms of modern design codes.

All the timber will be replaced with Angelim Vermelho, which is reddish-brown heartwood with a grain that is usually interlocked with a uniform medium-coarse texture, and with a moderate natural lustre. This Brazilian heartwood is rated and very durable and considered to be quite difficult to work on because of its density and irregular grain as well as a high cutting resistance – potentially blunting the cutters – it also has an unpleasant pungent odour when being worked on.

The entire area surrounding this historic bridge will be a hive for cyclists, walkers, visitors to the island and again become part of the living environments that contributes to the community.

Swissline Design are once again honoured to be part of a momentous project like this and look forward to a lengthy process of restoring all the timber elements of the historical bridge to its former glory.