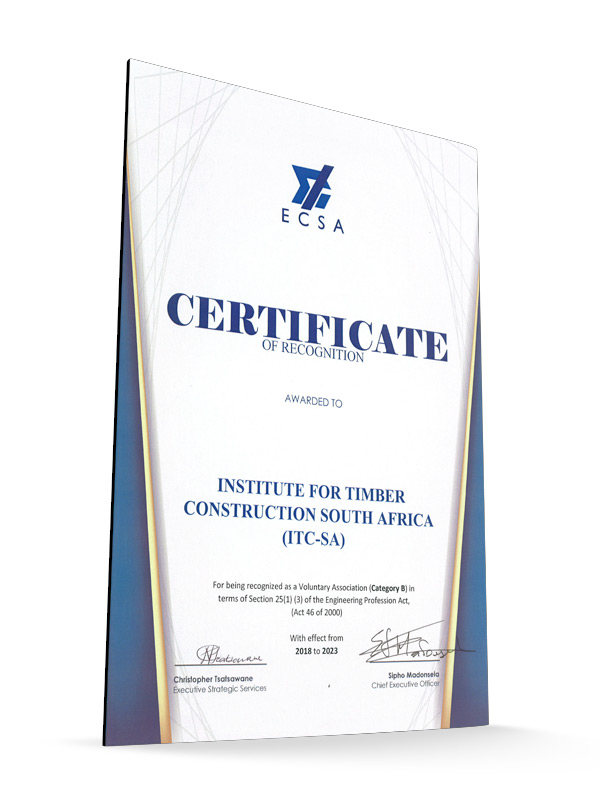 The ITC-SA’s certificate recognising the institute as a Voluntary Association. Credit: ITC-SA

In a media statement issued by the Engineering Council of South Africa (ECSA) on 2 August 2018, it was reported that the executive of Policy and Standards at ECSA, Edmund Nxumalo, noted that, “the revised and approved rules and framework stipulate that ECSA will be the sole authority on the accreditation, monitoring, and validation of CPD activities and providers.”

According to the statement, Nxumalo added that the update will result in the council’s development of an accreditation policy framework to be prescribed to universities and Voluntary Associations for the verification of CDP providers and the validation of activities. The council will, ‘also develop a policy for auditing and monitoring of Voluntary Associations and universities’.

According to Amanda Obbes, ITC-SA general manager, “The amendments to the Recognition Framework are welcomed by the institute. The changes necessitate that VAs are more accountable for the responsibilities outlined in the framework, the most important being the promotion of ECSA registration. The update also facilitates a closer working relationship between ECSA and VAs than ever before.

“Recognised VAs, like the ITC-SA, benefit through their association with a reputable and credible regulatory body, through which they may also apply for CPD accreditation,” says Obbes.

She concludes, “The ITC-SA’s now-enhanced association with ECSA will be passed on to its membership, and has great potential to influence an upswing in its reputational profile through dynamic collaboration in programmes and on projects. ITC-SA members also qualify for discounts with ECSA due to their recognised VA membership status. This not only bodes well for the ITC-SA membership, but serves the greater construction industry and the ever-important consumer at the end of the value chain.”