The technology of glued solid wood is significantly applied in the area of bearing wood structures. The history of the technology dates back to the 19th century, when the first construction of glued laminated wood, as we know today, appeared in England. 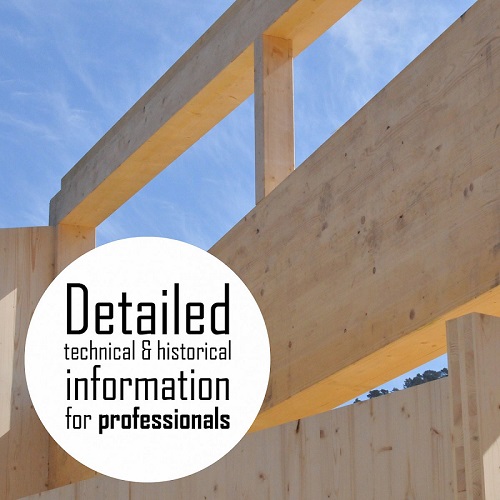 Otto Hetzer, who in 1906 acquired the patent for glued laminated beams composed of two or more lamellas (glued by the way that the wood fibres are parallel), is considered a pioneer of this technology. With the Hetzer´s construction method one no longer had to stick to the length or cross section requirements of the component imposed by the nature of trunk diameter. The technology of gluing allowed for a new era in wood constructions.

Great progress was also achieved in the area of used adhesives. Until the early 50s casein adhesives were used. The resorcinol-formaldehyde adhesive, which does not lose its properties even in humid conditions, was a significant discovery in the area of glued timber. Since then it has been possible to use glued-wood profiles outdoors also. The use of melamine-formaldehyde adhesives was another development. In the 40s, finger jointing, which ensures sufficient elasticity, was also developed. It is still used for longitudinal connections of bearing elements. Extreme progress has taken place through the implementation of mechanisation, with today’s fully automatised machines controlled by computers. This modern system enables accurate, fast and variable production.

The method of gluing preserves the wood from damage. The material does not lose strength as it does with carpentry joints. The strength of joints is required to be higher than the strength of the wooden material itself. It means that during the stress of glued joints the wood should be separated outside of the joint. Ecological adhesives with no health risk are used. There are regulations concerning material producers and manufacturers of wooden buildings which have to be obeyed.