By Wood for Good

Designed by floating architecture specialists, Baca Architects, Water Lane is an elevated family home that stands in a leafy garden. 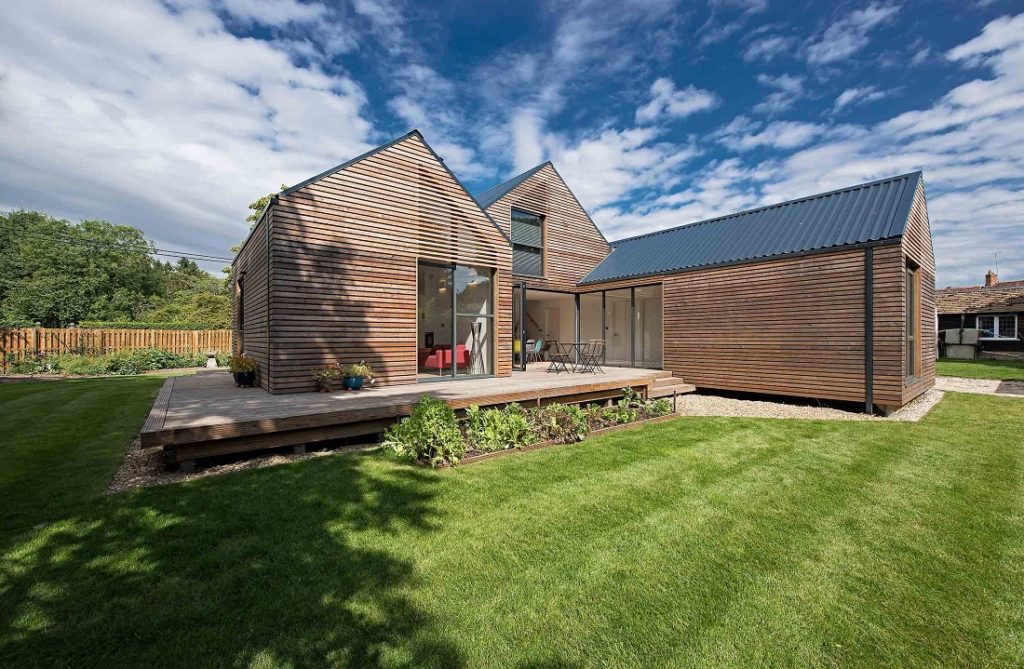 The site has a brook running along its edge and, during periods of high rainfall, the water level can rise sufficiently to flood the garden. The need to raise the house above the highest recorded flood point has been approached with a solution in which the surrounding landscape has been sculpted to accept encroaching water and provide a gradual warning of its advance. Additional swales, permeable paving and other sustainable drainage measures (SuDS) all contribute to an environmental strategy designed to reduce the runoff into the stream and thereby lessen the risk of the brook overflowing its banks.

The architectural approach taken complements this landscape solution by raising the house above its piled foundations on wooden blocks that support an elevated deck. This scheme allows water to flow freely under the house, rather than let it continue to rise and enter the ground floor, a concept that, during dry spells, has resulted in the impression of the dwelling appearing to levitate.

A heavily insulated timber frame superstructure has been used to form four inter-locking volumes, broken down in mass, to define the house’s different functions—living, dining, cooking and sleeping—and to complement the scale of other buildings in the village. The rooms are all interconnected but vary in ceiling height and volume. Water Lane’s plan is arranged around an open deck area that separates the living accommodation from the bedroom wing.

The house’s exterior has a rainscreen cladding formed from horizontally-fixed larch slats, some of which, in front of the tops of windows, are routed to maximise light into the interiors whilst also providing solar shading.

The flood-resilience strategy evolved for Water Lane has been founded upon sustainability principles which here extend to including the treatment of the surrounding landscape to provide a passive means of distributing the waters in the least-damaging way: not only to the house itself, but also to trees and neighbouring properties. It is a solution that, on appropriate sites, has potential for enlargement to multiple house developments.