A dream home becomes a reality

Chrissy and Nick Askew relocated from Cape Town to Chintsa in the Eastern Cape. For their new home, the young couple wanted a custom timber house. Bosazza Roofing & Timber Homes was awarded the contract to build the couple’s home.

Metal I-beams being installed during the project.

Chrissy originally came to Chintsa as a volunteer in 2004 and promptly fell in love with the town and the East Coast lifestyle. Having both spent time in South Africa and Germany, the couple decided to purchase two adjoining plots in Chintsa. The year 2018 finally saw their home-building dreams become a reality when they embarked on this project.

The project commenced at the beginning of October 2018 and was completed at the beginning of 2019. The site was closed for a month over the annual construction shut down period, so the project took around 5 months to complete – approximately one month over schedule. The custom house was to be built in timber frame and on stilts to accommodate the slope of the land on the plot, also making the most of the beautiful sea view.

The design brief for the home was to create a relaxed, beach style, open living environment with plenty of light and easy access to outdoor spaces.

The home is designed around the idea of having two adjoining living spaces, one for the couple and one for Chrissy’s parents when they travel to South Africa each year. “The floor plan was first designed by Chrissy and Nick themselves, who we worked closely with to make sure that the home could be built within their tight budget,” says Jonathan Bosazza, CEO at Bosazza Roofing &

Timber Homes. The original design was for a 260m² house, which had to be reduced to 200m² to do this.

To create space and light inside the house, the main living areas were built with high, exposed ceilings and roof trusses. The sheer height of the central beam – 4.6m from floor level – results in an expanded, airy living space. 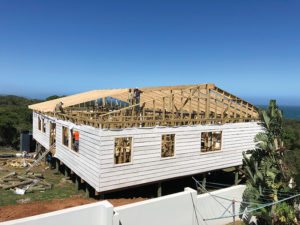 Loose rafter beams were installed to construct the roof.

The aesthetics of the roof design itself add to the sense of simplicity and open living. The top chord is manufactured from laminated timber beams which run the entire 17m length of the house. The trusses were constructed on site with laminated beams of 7.5m length. The beams were placed at 1.193 centres in accordance with the engineer’s design. Bottom chords were placed directly underneath the top chord beam to bind the loose rafters to the top chord. The bottom chords are held in place by industrial stainless-steel brackets and dome nuts. The magic of this roof is in the simplicity of the beam placement, with no complication of diagonal supports or pre-manufactured trusses, bracing and plates. “It looks simple and clean but supports a wide spanning roof – effectively 17m x 13m,” says Bosazza.

There is a large deck of 50m² that stretches the full width of the house on the sea-facing side. The structure is supported by huge 180mm to 200mm diameter CCA (chromated copper arsenate) treated poles, the substructure and deck are constructed with H3 treated pine. The homeowners will access the deck through wide sliding glass doors in the main bedroom, art room and living areas. The sliding doors in the livings areas are 4.2m wide and were installed using the I-beam goal post system. “We have adopted the use of this system when installing particularly wide openings for sliding and stacking doors,” Bosazza explains. The metal I-beam helps to support the structure and prevent movement around the openings.

The deck is partially covered which makes it useable in all types of weather. There is a custom-manufactured post and beam supporting this roof section which extrudes from the main roof. The post is constructed from two 228mm x 50mm beams with internal spacers.

Timber features catch the eye throughout the house – which is mostly finished in a neutral palette. All of the large, weight-bearing beams are varnished in brown to bring out the natural wooden finish. The internal ceilings as well as the external eave ceilings and cladding are all in a timber grain finish. The floors and cabinetry all feature various styles of wooden finish – making the house a perfect complement to timber home living.

Timber products used in the project 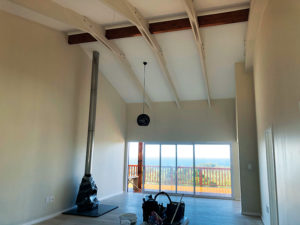 The roof was designed by Bosazza himself who specialises in roofing and timber construction. The design and installation were overseen by Royden Gaylard of Inyathi Truss and ITC-SA inspector, Leon Ferreira.

Among the products used during this project was laminated beams in the roof which were manufactured in pine. All the wall framework was constructed on site from 114×38 CCA H2 treated timber. The decking substructure and the deck was constructed of H3 treated timber. The external cladding was Vermont Nutec fibre cement in a timber grain finish. Ceilings were also Nutec with timber grain finish. To prevent having visible purlin clips in the ceiling, Mitek’s new approved roof screws were used to attach the purlins to the main rafters.

Challenges are to be expected when dealing with projects, even when things seem to be running smoothly. During this project, a major challenge was the manufacture and transportation of the huge laminated beam for the top chord of the roof.

There was time pressure for the roof, doors and windows to be installed before the annual construction shut down period in December, so that the house could be locked up and sealed during this time. “The delay in transportation of the beams meant that our team worked longer during this period to achieve this task,” Bosazza explains.

The long hours and a collaborative effort by the team paid off when the house was finally completed and handed over to the Askews. The couple was very satisfied with the work done by the Bosazza team. “Johnny worked with us on getting the project into our budget without compromising on the basic quality of our house. From then forward it was basically smooth sailing for us,” the couple says. There was constant communication between the Bosazza team and their client as Chrissy and Nick received regular updates about the project which included regular progress reports. The expenses of the project were also well-document transparently to ensure that the budget remained on budget. “We had peace of mind knowing there would be no hidden extra costs,” the couple adds.

“We had a great time celebrating the completion of the main structure of this house. Chrissy’s German heritage requires that the final ‘nail’ in the roof had to be fitted by her as the homeowner,” Bosazza says. Practical completion of the project was on 25 March 2019. The Bosazza team also has their own tradition called the ‘topping out’ ceremony. Maintained by the foreman Clement Ketse, the ceremony entails the installation of a white flag when the basic building gets to roof height. The flag is taken down during the ceremony once the house is airtight. “We enjoy the celebratory nature of these traditions and take cognisance of our important role in building our clients’ dream homes,” Bosazza concludes. 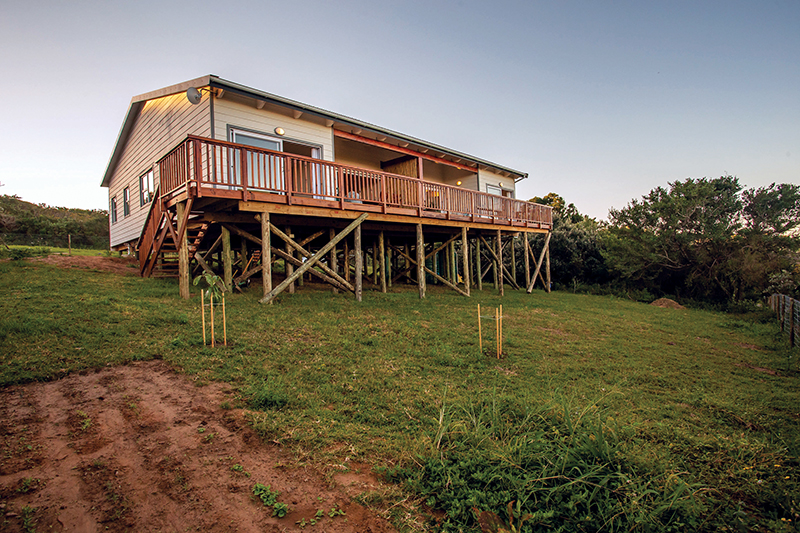 The completed custom timber home with a large deck area.