Montréal based Jérôme Ferrer restaurant won the award for the most beautiful restaurant at the Restaurant & Bar Design Awards. The restaurant, also known as Jérôme Ferrer Europea, was designed Provencher_Roy and is in the effervescent heart of the city’s downtown. 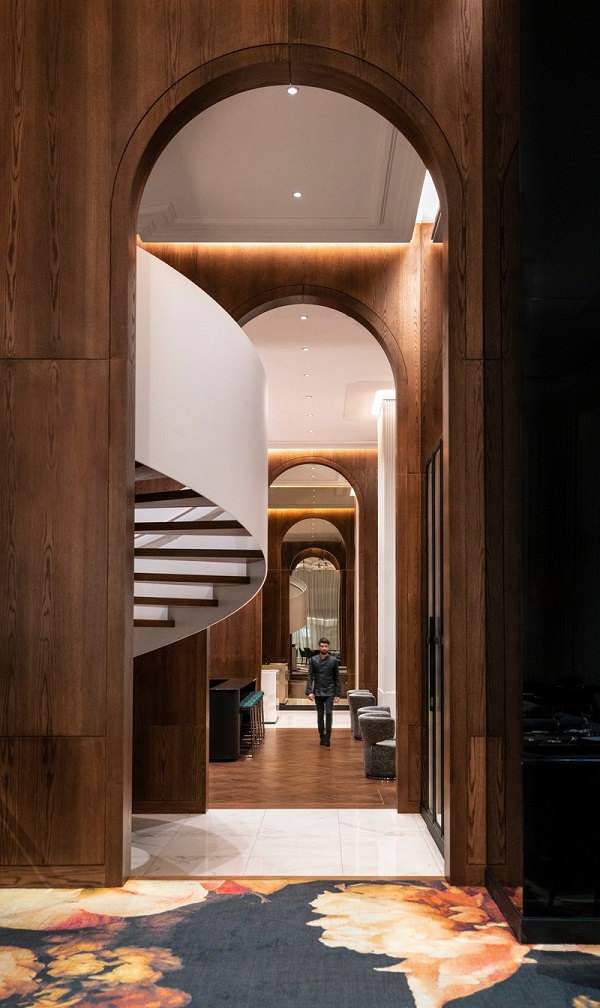 The restaurant moved to its new address in late 2018 and has distinguished itself internationally by winning at the prestigious Restaurant & Bar Design Awards in the Americas Restaurant category at the 2019 Best of Canada Awards Competition, organised by Canadian Interiors magazine. It has stood out thanks to its discreet sophistication, the richness of its materials, its remarkable cuisine and its well-thought-out circulations.

Europea’s open layout facilitates orientation and getting one’s bearings. It is subdivided into different zones that lead into one another, conducive to discovery, with monumental wooden arches that delineate these spaces and their different functions. Upon entering the establishment’s hotel-like lobby, the client is at once immersed in the chef’s bold and grandiose universe.

The patron then moves to the bistro: lively café by day and intimate lounge by evening, it is a sober, muted space that evokes the gentleman’s clubs of the bygone century. Next, the anteroom: a transitional space between the bistro and the dining room, it houses a cellar that is deployed over two floors and a circular staircase leading to the mezzanine.

The patron finally penetrates into the impressive 160-seat dining room. A two-level mezzanine covers half the floor area, with five-metre-tall ceilings, walls entirely in wood, ornate mouldings, enormous glass windows, and, as a showpiece, a singular carpet inspired by a work by American photographer Ashley Woodson Bailey. The heart of the dining room consists of an open kitchen, amply fenestrated, that enlivens the space and adds to the patron’s immersive experience.

Everything had to be delivered on a very tight deadline. Indeed, between the initial meeting with the client and the delivery date, a mere 10 months elapsed. The space chosen, at 1065 de la Montagne, formerly housed a small, two-storey restaurant and a large vacant space. It was necessary to merge these two sections into a cohesive whole. The designers took the time to carefully study the circulation patterns of waitstaff and patrons in order to fully leverage the space and optimise its functionality.

Provencher_Roy, working with various artists, created several one-of-a-kind custom pieces for the project, including furniture, lighting fixtures, wooden elements and the oversized floral carpet. In addition, the choice of noble materials, such as walnut and marble, dovetailed with the project’s initial aim: to emphasise refinement and elegance through the definition of the interior volumes, and to anchor the restaurant into its context. With their timelessness, Europea’s interiors provide a perfect setting for the pleasures of fine dining as performance!

“A space that masterfully plays on its scale and offers the ‘quietness’ required to fully appreciate the immaculate use of materials and detailing from walls to floors to stairwell, balustrade to screens. It is both ultra-classic and modern; its cool, uncluttered corners and passages giving off an air of cool, confident grandeur,” said Leigh Robertson, editor-in-chief of ELLE Decoration Magazine (South Africa) and judge at the Restaurant & Bar Design Awards.