By Dineo Phoshoko | All images by Amoretti Designs

Places of worship often provide people with an opportunity to gather and share a common religious devotion to a higher being. Some places of worship add to the feeling of sacredness to offer visitors, due to the design and architecture. The Houghton Masjid is a case in point.

Located on 45 West Street, Houghton, Johannesburg, the outside of the mosque is symbolised by two towers, known as minarets. Mohamad Ally, supervising architect of Muhammad Mayet Architects + Urban Designers explains that the site overlooks the M1 motorway and is revealed as one approaches from either the north or from downtown Johannesburg – making the building a dominant landmark framed by the Houghton ridge beyond. 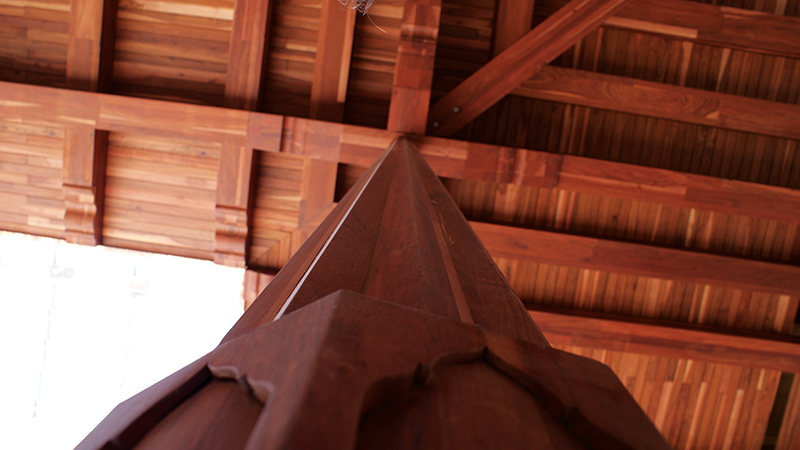 Columns for the pergola are 4 500m in height. 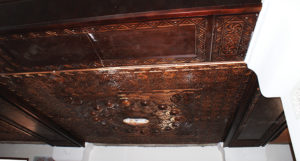 The specialised arabesque ceilings were also made from timber.

“Nestled among the matured oak trees and rolling hills of the adjacent golf course in the background, the building creates a ‘hill’ on site and attempts to enhance the setting’s prominence in the overall landscape,” Ally explains.

Whilst rooted in tradition, the design approach is less restricted in order to give the building a more contemporary character. This is mainly achieved through the introduction of a consecutive series of centenary vaults acting as wind catchers to the main hall. The main dome has been incorporated with the surrounding vaults on its left, right, and back. The gradual transitions are further enhanced by pendentive domes on each side and the front. The series of vaults and domes give an extended character to the scheme showing the diverse possibilities of creating a progressive transition of space by the juxtaposition of masses.

The theme of the centenary vaults as a structural form acting in total compression, has brought about the slim contour of arched bricks. “It gives an effect of lightness to the structure while allowing an economic use of materials,” says Ally. 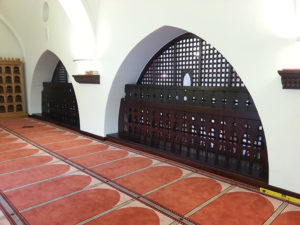 Hardwood walnut and beech were used for the mosque’s mashrabiya.

The building was commissioned in March 2007, which is when construction of the mosque started. The company (Amoretti Designs) was contracted to do various constructions on the mosque, which included the courtyard timber structure, internal door and frames as well as the semi-circular arched windows of the mosque.

Most of the timber work was done in the courtyard (Sahn), which is one of the most special areas of a mosque because it is the heart connecting the amenities (ablutions, toilets and entrances) to the prayer hall. It also forms the overflow space for Friday prayers and special occasions, which is when the courtyard is filled with worshippers.

Vincent Amoretti and his team manufactured the bespoke pergola for the courtyard of the mosque. After taking on the project, the client required a sample of the columns for approval before proceeding with the rest of the project. The project required work that had never been done before, and at the time, when the request was made for the sample, Amoretti did not know how to go about making the column. “I phoned my father, who is 89 and had spent his whole life in the joinery industry, to ask him how to go about manufacturing this specific column. To explain what the column looked like I asked him to look at a normal household candle that is tapered and has points on the outside. I then went down to my father’s flat in Cape Town, and together we worked out a basic idea on how to manufacture the column,” explains Amoretti. After various attempts and trying different methods, Amoretti settled on reverse engineering of the column which worked like a charm, and he managed to get the sample ready for the client. “It was quite a feat of engineering,” he says.

Once the full sample was complete, it was given to the client, who then gave the green light for Amoretti and his team to proceed with manufacturing and installing the pergola in the courtyard.

The team worked round the clock to have the projected completed in 18 months. Under normal circumstances, Amoretti explains that the project would have taken at least two years to complete. But due to the mosque being scheduled to open soon, the team had to ensure that they completed the work in the given time frame.

Amoretti explains that his team had never undertaken work of this magnitude, as it was the first time he and the team had ever created pergolas of this kind. Twelve pergola pillars had to be manufactured according to the specific design for the courtyard. In addition, beams to support the courtyard structure also had to be made. 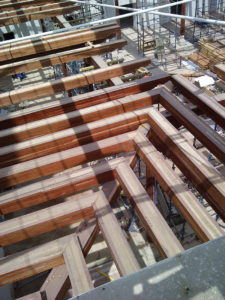 An aerial view of the courtyard during construction.

The pergola beams and columns were made with a Zimbabwean teak wood on the outside and a softer wood on the inside so that when glued together, the glue would hold more fibre of the softwood against the hardwood. He highlights that if the entire structure was constructed only from the hardwood teak, the adhesion in the timber would be compromised – resulting in a potential failure of the pergola structure. Amoretti explains that hardwood requires a softwood inside for all the wood to stay together when being glued. The mouldings at the ends of the beams were made separately and then glued onto the beams.

The 12 columns for the pergolas had to be reverse engineered and manufactured from inside to the outside, the columns were 4 500m in height and tapered from 350mm bottom to 250mm top with 12 points. There were a total of 200 beams in the construction which were made up of three parts laminated together. Once completed the ends that were left open had to be cleaned, levelled and squared by hand, and then the moulds were levelled and glued separately. There were 84 beams of 5 400mm of 250 X 250mm with moulded ends. The 252 separate end moulds were made and fitted by hand.

The mosque was designed within the guidelines of traditional Islamic architecture, something which made the project stand out. Among the factors that made this project unique was the specialised arabesque ceilings as well as the mashrabiya. In a research paper tilted Islamic Architectural Heritage: Mashrabiya, Ayman Fathy Ashour defines mashrabiya as “a type of oriel window enclosed in carved wooden latticework”. The paper further explains that this type of feature is rooted in traditional Islamic architecture. 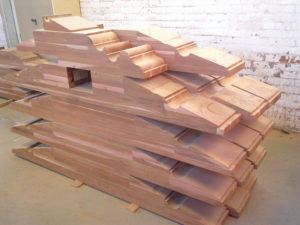 A collection of the completely manufactured support beams.

Another unique aspect of the project was the mimbar. More commonly known as a pulpit, the mimbar is the elevated seat of honour in the mosque from which the Imam (local priest) leads worship. Important public pronouncements are also made from the mimbar. The doors of the mosque were made by Egyptian craftsman Mostafa Hassan based in Cairo. All the unique features and other aspects of the mosque were made from wood. Indonesian Merbau was used for the internal glass doors and semi-circular arched windows. The service doors to the minaret were made from meranti. The rest of the mosque’s doors, mashrabiya and mihrab were made in Egypt from a combination of hardwood walnut and beech.

The team faced many challenges during this project. Among them was the time frame in which they had to complete the project. Historical issues with previous stakeholders, resulted in the project coming to a halt temporarily. As a result, the Amoretti team had to work round the clock to make up time and meet the deadline. “It was a lot of hard work. We worked some days from 4.30am to 10:30pm at night,” Amoretti explains.

Another notable challenge was that the project was made up of work that had never been done before. On top of everything else, the team had inherited the project when it was already at an advanced stage construction-wise, which in turn created other problems where there were some inconsistencies found with the measurements within the courtyard. The team were, however, meticulous in their work because not a single piece from the custom-made pergola was returned or out of place due to poor quality.

In the end, the Amoretti team managed to complete what initially seemed like a monumental task. A combination of hard work, dedication and collaboration between the Amoretti team and other stakeholders of the project made it possible for the successful completion of the project. Other stakeholders included Muhammad Mayet Architects and Urban Designers as well as Egyptian architect Abdel-Wahed El-Wakil – who is well known for his designs of Islamic architecture including mosques in Saudi Arabia. “We are thankful that a simple system was devised that all stakeholders are happy with,” Amoretti concludes.