Sail away to another world

By ALA Architects | All images by Tuomas Uusheimo

In December 2018, the Helsinki Central Library Oodi was opened to the public for the first time. The newly constructed central library, commonly referred to as Oodi, marked the 100th anniversary of Finland’s independence. 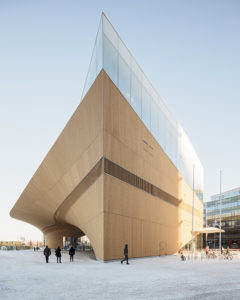 Oodi represents a new era of libraries. The completed building, in the heart of Helsinki, consists almost entirely of public space and offers a wide selection of services. It will become the new central point for the city’s impressive public library network.

Architects from ALA Architects in Helsinki, Finland were responsible for the architectural concept of the library. The design divides the functions of the library into three distinct levels: an active ground floor, a peaceful upper floor, and an enclosed in-between volume containing the more specific functions. The building incorporates library facilities, meeting rooms, group working spaces, a café and restaurant, an auditorium and recording studios among others.

This concept has been developed into an arching form that invites people to utilise the spaces and services underneath, inside and on top of it. The resulting building is an inspiring and highly functional addition to the urban life of Helsinki and the Töölönlahti area.

The Kansalaistori square (citizens’ square) across the street from the Parliament House seamlessly continues inside the ground floor level of the library building. The flexible spaces are suitable for both small events and large happenings. The movie theatre and the multipurpose hall can be used as part of the open lobby space or separated off to cater for specific events. Walking through the ground floor offers a quick glimpse at the services available in the building. The sculptural wooden surface arches over the ground floor areas as a dramatic bridge-like structure. This innovative structural solution has enabled the creation of a column-free public space to maximise the accessibility and visibility of the programme.

The book heaven on the top floor, is a vast open landscape topped with an undulating cloud-like white ceiling. Here the best features of the modernist library meets the possibilities provided by up-to-date technologies. A calm, serene atmosphere invites visitors to read, learn, think, and to enjoy themselves. From this level visitors can enjoy an unobstructed 360-degree panoramic view of the city centre.

The middle floor, the attic, consists of flexible irregularly shaped rooms, nooks and corners inhabiting the spaces between the trusses of the bridge structure. The enclosed spaces are designed to accommodate both noisy and quiet activities. The stepped seating in the open central area of this floor is the result of the form of the cantilevering, twisting west façade. 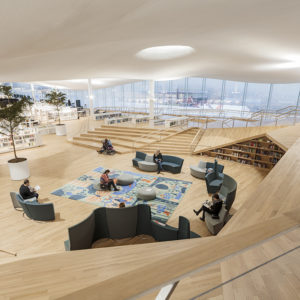 The top floor of the library overlooking the children’s library. 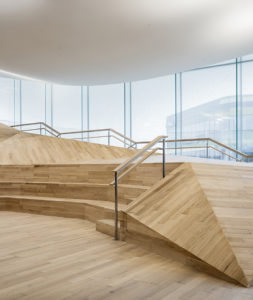 The flooring of the library was made from timber.

By opening directly to the surrounding cityscape and by dissolving the border between indoor and outdoor areas, the building engages directly with the Töölönlahti area. The large foyer and the glass-walled multi-purpose hall on ground level act as indoor extensions of the outdoor spaces.

The arching wooden volume creates an entrance canopy over the Kansalaistori square, forming a covered outdoor space that expands the building’s functions such as the ground level restaurant to the square. The large public terrace on top of the canopy doubles the amount of public outdoor space available for library visitors and creates a new destination where people can meet and observe the city below.

There will be three public entrances in the building: one in the south for the main pedestrian flow from the direction of the Central Railway Station, one next to the Kansalaistori square to the west of the building shielded by the overhanging canopy, as well as one for the visitors to the family library and the movie theatre in the north-eastern corner.

The spaces for maintenance and library logistics are located at basement level. The administration and storage spaces are kept to the minimum on the publicly accessed levels to maximise the open and accessible nature of the library. The administrative and storage functions of Helsinki Public Library will remain at the main library in the nearby Pasila district.

Library operations are statutory in Finland. Basic library services are free of charge and freely available to everyone. The new library will be at the forefront of the renewal of the city’s library services. In addition to the core operations, there will be a wide range of services available inside the building alongside an abundance of lounge spaces and auxiliary services that support the operations such as Helsinki Info – the City of Helsinki’s information centre; Europa Experience – the centre for EU related information; and Kino Regina – the National Audio-visual Institute’s movie theatre. In terms of services offered, the new library, a public space open seven days a week, will be the largest public library in the Helsinki metropolitan area, and will most certainly also become the metropolitan area’s most popular spot for returns and reservations.

The library will enliven and diversify the new urban environment created in the Töölönlahti area. It will offer activities and experiences for all ages. There will be plenty of spaces that enable people to gather and spend time together, free of charge. The role of the library’s clients will evolve from passive media users to active agents, participants and content producers. As a non-commercial open public space, the new Central Library will act as Helsinki residents’ common living room, workspace and learning environment.

Cranes had to be used to erect the bridge of the library. 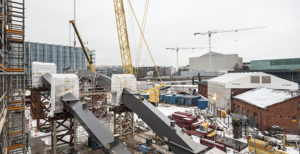 In addition to wood, steel was used to construct the building’s bridge structure.

Oodi’s spatial concept, based on three individual public floors, is executed by building the library as an inhabited, asymmetrical bridge spanning over 100m over the open ground floor space. The bridge structure, consisting of steel trusses and beams, is supported by two massive steel arches, tensioned together with a reinforced concrete tension slab. The innovative structural solution has enabled both the construction of the flexible column-free interior spaces and the possibility for the construction of a future road tunnel under the site. Secondary steel trusses support the cantilevering balcony and roof canopy asymmetrically from the arch structure, forming a unique structural design to accommodate both permanent and temporary functions for both the library and the public realm.

Oodi has been built using local materials and with local climate conditions in mind. The wooden façade is made from prefabricated elements. Finnish high-quality spruce, which is 33mm thick, was used for the cladding. A specific grading and quality control system was developed for the timber, the sawing and the treatment of the slats. The complex curved geometry was designed and manufactured using algorithm-aided parametric 3D design methods in order to achieve the required precision. The appearance of the façade will develop over the years towards a deeper, richer version of its initial hue.

The design of the building envelope is intrinsic to the passive energy approach adopted by the project team. Detailed analysis of the façade performance has informed the environmental solutions and has allowed the team to minimise the requirement for mechanical environmental control systems, which facilitates the highly flexible architectural solution. The glass facades allow for large amounts of functional daylight in the public areas, reducing the use of artificial light and enhancing the quality of the interior spaces as a multifunctional citizen’s forum. 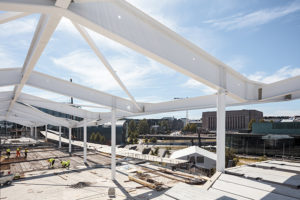 The bridge structure consisting of steel trusses and beams is supported by two massive steel arches. 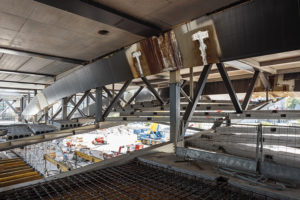 A view from inside the top of the bridge during construction.

The carefully planned placement and optimisation of building services has enabled the flexibility of the spatial arrangements. All public levels of the building are equipped with access floors to allow for changes in use during the estimated 150-year life span of the building.

The budget for the project was EUR98-mil and took just under three years to complete. The library is expected to attract 10 000 visitors per day and 2.5 million visitors per year. The library was crowned winners of the Helsinki library competition.