This article was first published by the Fast Company

Wood is sustainable, renewable, and versatile and is ideal to use as a building material.

Thanks to a slate of relatively new engineered wood products such as cross-laminated timber and glued laminated timber, wood is becoming bigger and stronger. These engineered products, known as mass timber for their glued-together thickness, are increasingly finding their way into construction projects around the world, from an eight-storey apartment building in Portland to two 10-storey office buildings now under construction in Toronto to an 18-storey mixed-use tower in Norway that is currently the world’s tallest timber building. Unlike concrete, which produces an estimated 5% of human-generated carbon dioxide emissions every year, mass timber sequesters CO₂, turning buildings into environmentally-friendly carbon sinks. 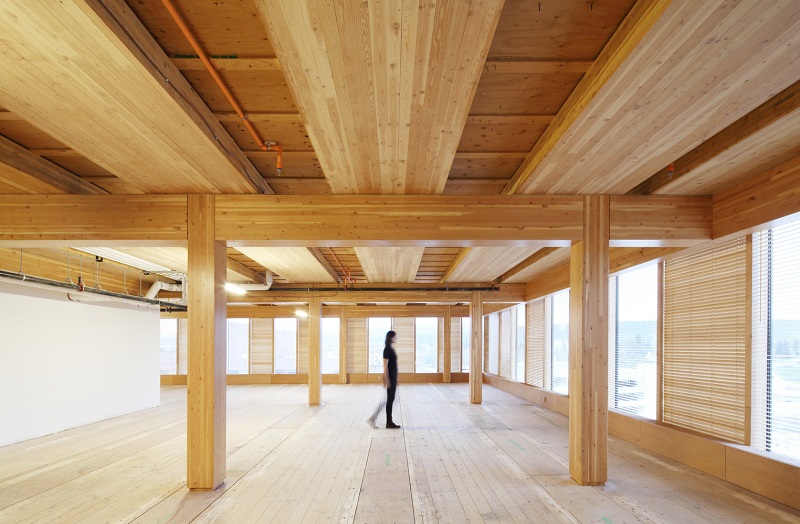 With global temperatures on the rise and wildfires regularly breaking out in places such as California and Australia, combustible wood may seem like a risky way to build for an uncertain future. According to experts, though, these mass timber products may become a more affordable and sustainable choice for builders looking for fire-resistant material. Due to its plywood-like layers, cross-laminated timber, or CLT, has been found to char during a fire at a slow enough rate that it can take more than 90 minutes of burning for a structure to collapse. By comparison, tests done on single-storey wood-frame homes resulted in collapse after just 17 minutes. But while collapse may be delayed, the added fuel load of mass timber can speed up the initial growth rate of a fire. Completely fireproof wood buildings are conceivable but not feasible. The goal is to increase their fire resistance. On this front, CLT is promising—but there’s still much to learn.

“CLT, which has been around for 30, 35 years, has only really started to be used as a larger building material in the last 10 years or so. So suddenly we need to start understanding how it performs in fire,” says David Barber, a fire engineering expert and principal at Arup.

Most of the buildings that burn in wildfires are single-family homes, and most of these are built with traditional two-by-four wood framing. Because CLT can be around 20% more expensive than an average light-framed wood home, it isn’t often found in single-family homes, but rather in taller buildings that need more structural support. These uses tend to be more expensive than traditional concrete or steel construction—one feasibility study of a hypothetical 10-storey apartment building found CLT to be between USD6 and USD10 more expensive per square foot—but Barber says costs are coming down.

Compared to the recent past when CLT would be used sparingly as a wall or floor plate in a low-rise apartment or office building made of concrete and steel, Barber says engineered timber products are being used more intensively now in ever taller projects. “The way we’re using them is just different. Part of that is a desire for taller and larger buildings and a desire to build more efficiently, which means you end up having engineered timber materials pushed beyond what they were often traditionally used for,” he says. That leads to these materials sometimes being used in ways that haven’t been fully tested. Fire codes are now beginning to be updated to include materials such as CLT.

“Prior to the 2021 edition of the code, being able to go this high with this type of construction wasn’t really permitted. It wasn’t really anything that had been tried before,” says Val Ziavras, a technical services engineer at the National Fire Protection Association, a fire safety nonprofit that develops codes and standards for buildings, services, and installations. “It’s a fairly new phenomenon, and the codes always take a little time to catch up with new technologies.”

CLT is used most often in apartment buildings that are under about 10 storeys tall. Ziavras says the codes are clear that CLT is fire-safe in these types of projects, but there’s still some ambiguity about how the material itself is used. Often, it’s used simply as a workaday structural beam, and it’s covered up with fire-resistant gypsum board to enhance its safety. But, increasingly, some designs call for the CLT itself to remain on display. “From what I’ve heard people want to use it because, let’s face it, wood is beautiful to look at.

So why would you want to build with it and then have to cover it up?” Ziavras says. Exposed wood might not be the safest choice. In 2018, the NFPA released a study on the fire risk of CLT in tall buildings. The testing process included building six rooms out of 175-millimeter-thick CLT wall panels and lighting them on fire. Uncovered CLT elements fully caught flame 3 to 5 minutes earlier than covered elements. But because of the slow rate at which the fire can burn through CLT’s many layers, their slow charring rate, CLT elements can withstand flames and remain structurally intact for much longer than frame-built wood buildings. “The key thing is that all building materials are vulnerable to fire. They all have strengths and weaknesses,” says Barber, who notes that CLT buildings in the US require sprinkler systems that would prevent all but the most extreme fires from engulfing an entire building. Even so, a building made primarily out of wood is inherently a greater fire risk than one made primarily out of concrete or steel.

And though wood is no stranger to fire, mass timber forms such as CLT may actually become preferred building materials as they become more cost-competitive with concrete and steel. And builders will see that the fire risk of CLT is relatively low overall. “At the moment it probably is still a niche product,” Barber says. “In 5 years’ time or 10 years’ time it probably will be, I would hope, a lot more mainstream.”