By Inès Magoum (This article was first published on Afrik21)

Perhaps the solution to the problem of climate change could come from tropical forests – such as the Congo Basin. 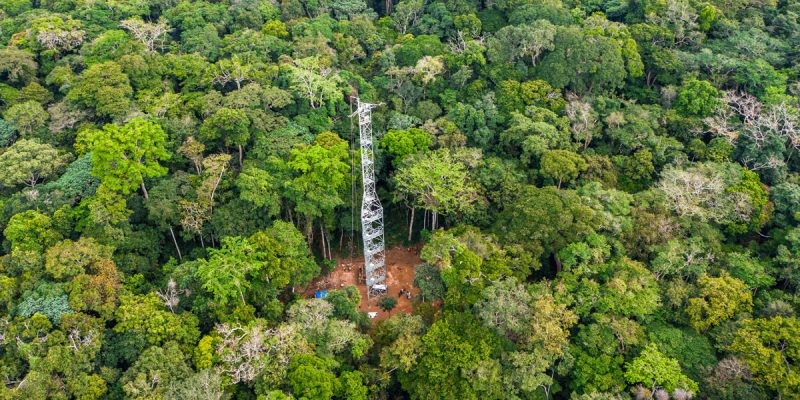 A ‘carbon-flow’ tower was recently commissioned in the locality of Yangambi in the DRC to understand the role of tropical forests in the fight against climate change. Image credit: Afrik21

According to the scientific community, this tropical forest in Central Africa is an important carbon sink. A ‘carbon-flow’ tower was recently commissioned in the locality of Yangambi in the Democratic Republic of the Congo (DRC) to understand the role of tropical forests in the fight against climate change.

“How do tropical forests contribute to mitigating the effects of climate change?” To answer this question, the international scientific community decided to study the exchange of greenhouse gases between the forest and the atmosphere in the Congo Basin, located in Central Africa. “We know that the preservation of forests in Central Africa is crucial in the fight against climate change, but until now their contribution and potential as carbon sinks has probably been underestimated,” says Pascal Boeckx, a professor at the University of Ghent in Belgium.

The new studies are being carried out in a ‘carbon flow’ tower in Yangambi, in the Tshopo province of the DRC. The recently inaugurated research centre is a project undertaken by various international institutions, including the University of Ghent in Belgium, the Centre for International Forestry Research (CIFOR), the R&SD Company and the Regional Post-Graduate Training School on Integrated Management of Tropical Forests (ERAIFT), in partnership with the National Institute for Agronomic Studies and Research (INERA). According to Cifor, the ‘carbon flow’ tower is the first step in a major project to enhance the value of the tropical forest of the Congo Basin, the second largest in the world after the Amazon in Latin America. The centre is currently managed by Congolese technicians working with Irena.

The 55m high ‘carbon flow’ tower (15m above the forest canopy) supports the Yangambi research station, which carries out studies on climatology. The tower will fill a huge data gap on the importance of African rainforests in capturing global carbon emissions, changes in local and regional rainfall patterns, and the effect of forest degradation and deforestation on global warming. According to Cifor, all the data produced will be open and free of charge for the international scientific community.

The initiative is part of a project funded by the European Union (EU) and Belgium to make Yangambi a scientific hub for the benefit of the populations and biodiversity of the DRC. “This tower will place the DRC at the forefront of scientific research in the global fight against climate change and, in particular, its consequences in the tropics,” says Jean-Marc Châtaignes, EU ambassador to the DRC.