The lure of timber

Timber houses are becoming more popular in South Africa as people realise the many benefits. Timber in Construction recently spoke to a Pretoria-based contractor and a new timber house-owner in the Eastern Cape to find out what happens behind the scenes of constructing a timber house. 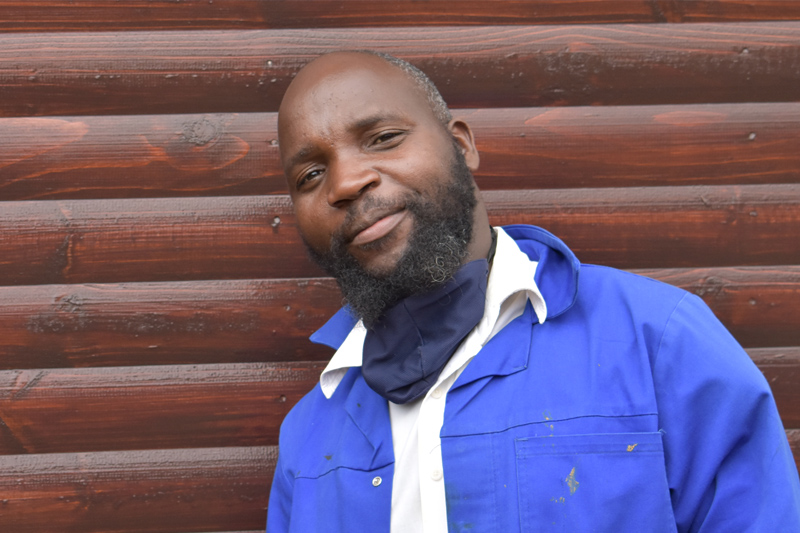 Although more South Africans are considering wood as a viable alternative material to build their homes, the number of timber houses in South Africa pales in comparison to countries like Australia, New Zealand, the US and countries in Europe, where wood is the primary source of building material. According to the South African Department of Trade, Industry and Competition (dtic), timber frames account for about 70% of all housing stock in developed countries, representing close to 150 million homes. In South Africa, in stark contrast, fewer than 1% of homes and buildings are constructed from wood, even though timber is a reasonably abundant resource in South Africa and the country has a vibrant wood and forestry sector.

Several misconceptions about wood houses pervade the public discourse in South Africa to the detriment of timber as sustainable building material. Most people believe that wood is prone to fire, that it is likely to rot over time, that wood lacks structural strength and that it is more expensive to build and maintain. These beliefs have been perpetuated in South Africa for decades, but are, of course, nothing more than trivial myths. According to the dtic, wood is, in fact, a durable material that can last for hundreds of years, while modern wood preservatives enhance natural durability. Moreover, the production and processing of wood uses less energy; wood has psychological health benefits; is a natural insulator and has the unique ability to store carbon.

“There are many benefits of using timber as a construction material,” says Obert Chizema, director of Pretoria based Chimu Construction. Chizema started the company with a friend in 2012 after working as a carpenter for more than 15 years. Today, Chizema’s company is thriving. He says that there has been a clear uptick in demand for wooden houses in South Africa, and although Covid-19 provided several challenges during the initial hard lockdown, the company has been operating 24/7 from the start of level-five lockdown, being given essential services status.

“There is definitely a trend to build timber homes, especially in the Eastern Cape, says Chizema. People are buying bigger pieces of land closer to the beach and selling their brick houses for between R1.5-million to R3-million. A new timber house can cost anything from R300 000 to R500 000, which leaves them with enough money to invest in a prime spot with a view of the ocean,” says Chisema. “It seems that people have realised that timber is a good building material and at the same time, that it costs less and that it is quicker to construct than a brick and mortar home,” he adds.

Chimu Construction recently built a timber house close to East London for a client who plans to move to the coast after retirement. “He decided to build a timber house because of the environmental spin-offs, the cost benefits and the short timelines involved in constructing a timber house,” says Chizema.

The house is 80m2 with an open plan lounge, a dining room, a kitchen, two bedrooms and a bathroom with a shower, toilet and washing basin. The entire project was completed within seven days.

Chimu Construction erected the timber shell, fitted the doors and windows, and did all the panelling on the inside of the house. Although this client decided to use different contractors for other functions like plumbing and electricity, it is something that Chimu Construction can include in their overall quote.

Windows are available in a range of sizes depending on the client’s preference, and can be standard timber windows, or standard plastic or aluminium framed windows, while owners can choose to fit either normal timber doors or standard sliding doors. Chizema’s client in the Eastern Cape had 1.2m x 1.2m aluminium windows fitted in the lounge and bedrooms and 1.2m x 900m aluminium windows in the kitchen. The exterior Maranti kitchen door is a great feature, while the 1.8m long sliding door between the lounge and the patio gives the living space a finished touch. The lounge leads to a 1.8m x 8.5m wooden deck. 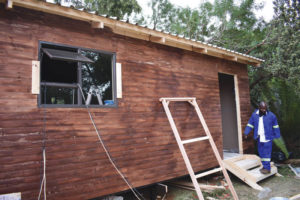 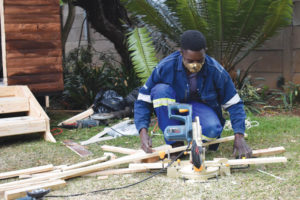 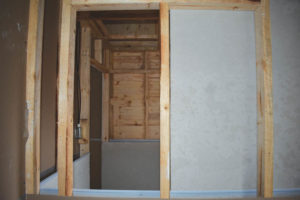 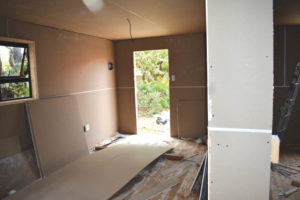 The wooden floor is secured on treated timber poles with a gap of about 700mm between the house’s floor and the ground. The height of the floor will depend on the surface and topography and lie of the land. This house is perfect for two people, although you do get them in much bigger sizes, and you can even add a few storeys.

“A timber house is something that has always appealed to me. Although there are a host of regulations and bureaucracy to deal with, and it becomes tedious and drawn-out, once the contractors are on site, the assembly is much quicker than constructing a traditional brick building,” the client tells Timber and Construction.

Covid-19 has obviously slowed down the whole process, but at the end of the day one has to get the permits and plans approved by the municipality, which is a normal procedure. The requirements are the same as for constructing a new brick house and a lot will depend, obviously, on how long the application sits with the municipality.

Maintenance on a timber building

According to Chizema, it is not true that wood buildings require more maintenance than brick and concrete buildings. In fact, he says that the maintenance on timber constructions is far less. “With any building one has to do maintenance. The trick is to do it properly. A brick building must be plastered, painted and damp-sealed, and that process needs to take place every few years, for example. The timber we build with is fully treated at the sawmill or retailer. At the house in the Eastern Cape we used treated Pine timber. Once the house is constructed, we paint the outside with a good exterior wood sealer. The owner needs to apply a second coat of sealer after six months, and then again after one year. Thereafter the wood only needs to be treated every two or three years. It is important that the owner follows the prescribed guidelines. It is the same as using the correct paint for the right application on a brick house, and following the right steps” says Chizema.

Contrary to popular belief the maintenance on a timber house is less than that of a brick and mortar house. People build with Facebrick because they want to avoid painting but there is still a lot of maintenance. The Facebrick also needs sealer to prevent the sulphur bleeding through the bricks and if you do not maintain the house, it will cost you dearly. Maintaining a timber house is no different. If you do not paint the walls often, they will deteriorate and crack and damp will rise, to the detriment of the structure. It is the same with wood, if you do not treat it, the wood will start rotting.

Being efficient and saving cost

The idea of timber houses is not new in South Africa. They have been around for a long time especially in the forested areas of the Eastern Cape and towns like Knysna on the Garden route of South Africa. The beauty of timber houses is that you can, much like a brick structure, do whatever you like in design and for practical reasons. Owners can decide whether to add insulation in the ceilings and in the walls before it is panelled, for example. It all depends on the limits imposed by the budget, of course. However, building with timber rather than brick will result in cost savings of at least 60%, a significant amount in a depressed economy at a time when most households are struggling to keep head above water.

Chimu Construction’s client in the Eastern Cape says that he was impressed with the efficiency and quality of the work. RhinoBoard was fitted on the inside walls of the living space and a waterproof panelling in the bathroom and kitchen. “The client chose 22mm half-log treated Pine logs for the outside of his house, the other sizes being 16mm and 32mm,” says Chizema.

He further explains that the first step in the building process is to plot the plan on the ground before cementing poles (in this case 280mm treated poles) to carry the timber floor into holes in the ground. The poles and the timber flooring are painted with CreoSite. “The holes are normally 500mm deep, or until they encounter steady ground, before the poles are fixed into these holes. In total, the house has 32 poles underneath the floor with a metre spacing between the poles. The floor consists of 22mm Pine Tongue and Groove with floor trusses spaced 500mm apart and bearing beams underneath the trusses. Chizema says that the owners can tile the floor or put another layer of wood flooring on top of the Pine, depending on the strength of the floor. They can also choose to build the entire house on a solid concrete floor. There are between four and five workers on site at any one time. All the client really has to do is mark out the house on the land. Chimu Construction transports all the wood to site and takes care of the rest.

Chizema believes his business has grown through word of mouth because his clients are always happy with the outcome. “We focus on building timber houses at a competitive price, but most of all we make sure we deliver a quality product according to what the client wants, and we do it quickly,” he says. Chizema sources his timber within the Pretoria area, mostly from retailers like Nambi Log Homes, with whom he has established a solid relationship. He then trucks the wood across Southern Africa, to wherever he works, including neighbouring countries where he has completed several substantial projects. Chizema is on a good wicket, and with South Africa experiencing huge challenges in its housing and construction sectors, it will be interesting to see what role SMEs like Chimu Construction will play in the future.