Recent reports have highlighted the key role that African timber companies are playing to support the development and maintenance of essential healthcare infrastructure during the pandemic.

This article was first published in the Tropical Timber Market Report, and has been reproduced in its entirety.

Tullia Baldassarri of Interholco, which is headquartered in Switzerland and whose subsidiary IFO manages 1.159 million ha of certified forest in Ngombé in the Republic of Congo (RoC), presented details of the company’s response to the Covid-19 pandemic to the STTC webinarin November 2020. 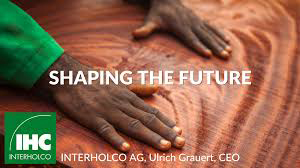 Interholco have invested in medical facilities and equipment against increased incidence of the disease in the RoC. With strategies aimed at both prevention and treatment, the focus has also been on health education and sharing knowledge and best practice. It was noted that there are more than 1 200 workers at the IFO site in the northern part of RoC, which is 800km from the capital Brazzaville. The Ngombé concession area also supports a much larger population of 16 000.

Healthcare infrastructure in this region is limited, so Interholco has developed a joint plan with the state for prevention and mitigation of the Covid-19 pandemic.

“We raised further amounts through an international crowd funding initiative,” says Baldassarri. “Contributors included customers, NGOs and business partners and we also had donations of PPE.”

Healthcare awareness raising and training was another aspect of Interholco’s strategy and, to ensure continuity of supply, it set up a local tailors’ cooperative to make face masks. Interholco said the exchange of information between companies on tackling the crisis in the region has proved invaluable.

“Also helpful were pandemic webinars organised by IDH-the Sustainable Trade Initiative,” says Baldassarri. “Input from companies in Liberia was particularly useful, given their Ebola experience.” So far, incidence of Covid-19 in northern RoC has not been high. One reason for the relatively low impact of Covid-19 in the area is thought to be demographics, with just 3% of the population in Central Africa being over 65 compared to 20% in UK or France. But Interholco believes the measures they’ve taken, in association with other companies and local authorities, have contributed to curbing disease spread.