A recent study by Stephanus van der Westhuizen, structural engineer at Zutari, looked at the economic viability of a multi-storey mass timber building for South Africa through a development cost comparison. 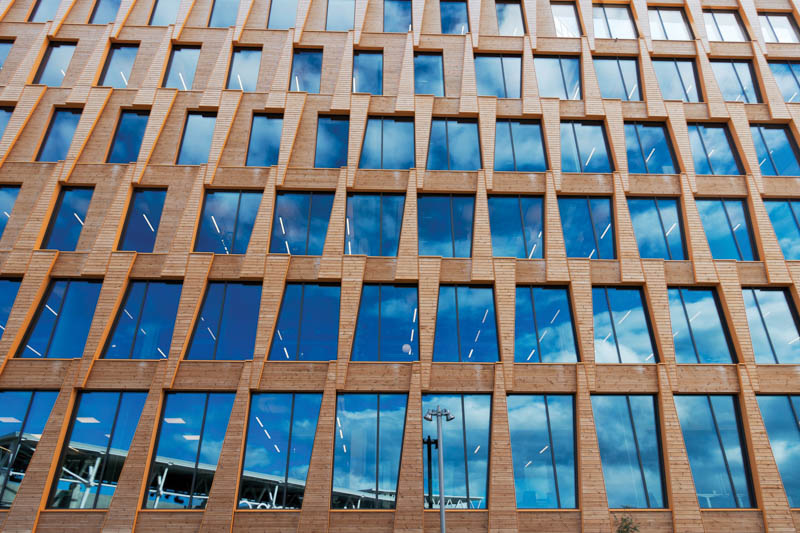 First, the research investigated whether South African plantations can provide sustainable volumes of high-grade (S7, S10) timber for a multi-storey mass timber building market. This was followed by the design of two 8-storey commercial buildings, consisting of a mass timber frame and of a reinforced concrete frame, respectively.

A focus group workshop, conducted with industry professionals, assisted in the development of the construction schedules. In the subsequent step, a financial model was used to determine the overall development cost and financial feasibility of the ventures.

Finally, a sensitivity analysis was conducted to investigate the effect of certain variables on the overall profitability of the mass timber frame development. The research also served as a case study for the implementation of Building Information Modelling (BIM) in a project team. Through this, an assessment was made regarding the benefits and limitations of BIM. The research revealed that mass timber products would need to be imported to satisfy a rapid growth in the multi-storey mass timber building market in South Africa as current timber supplies (S5, S7, S10) are oversubscribed. Studies suggest that future log resources could be added to the market through the development of new plantations, however, these plantations will only become available after 24 to 30 years.

A significant finding of the sensitivity analysis was that the mass timber frame building proved to generate a higher 5 year IRR than that of the reinforced concrete frame once the mass timber building achieved a rental premium of 7.8% or more. The sensitivity analyses further showed that the importation of the mass timber elements remains an expensive option, with a 16.4% 5 year IRR for the imported mass timber frame (R17:EUR1 exchange rate). The study highlighted a number of aspects, particularly in the manufacturing sector, that can be addressed in order to develop a sustainable multi-storey mass timber building market. This includes improvement in the sourcing of high-grade structural timber (S7, S10) and investment into equipment to enable the large-scale production of large beams/columns typically required in multi-storey mass timber structures. Shortcomings were observed in the all-round implementation of BIM, particularly regarding the information provided by South African suppliers of mass timber elements. Nonetheless, a number of the BIM benefits were realised, with the main advantages being 3D visualisation and clash detection.