Oodi: At the heart of Finnish culture

The Central Library Oodi opened to the public on the 6th of December 2020, on the eve of the Finnish Independence Day. Besides its function as a library, Oodi, which is located in Töölönlahti, is a new landmark in the heart of Helsinki, a place for learning and a tourist destination. The Central Library is an example of steel, concrete, wood, and glass construction, which is highly energy-efficient. The Central Library in Finland is highly energy-efficient. Photo by Tapio Haaja/Unsplash

Oodi occupies a hugely significant site in central Helsinki: facing the steps of the Finnish parliament building, the Eduskuntatalo across the Kansalaistori square, a public space flanked by major civic institutions: The siting of Oodi opposite the Eduskuntatalo was chosen to be symbolic of the relationship between the government and the populace, and act as a reminder of the Finnish Library Act’s mandate for libraries to promote lifelong learning, active citizenship, democracy and freedom of expression. It also places the new library in the heart of Helsinki’s cultural district, close to many of the capital’s great institutions.

Oodi has a peaceful open-plan reading room on the upper floor that has been nicknamed ‘Book Heaven’, but books only fill one third of the space within the library. By reducing on-site storage and consulting library-users on how they access culture, the designers, and librarians of Oodi have been able to introduce facilities including a café, restaurant, public balcony, movie theatre, audio-visual recording studios and a makerspace. This is representative of broader experimentation within Finnish libraries to offer new services in addition to loaning books.

The design divides the functions of the library into three distinct levels: an active ground floor that extends the town square into an interior space; ‘book heaven’ on the upper level; and an enclosed in-between volume containing rooms to accommodate additional services and facilities within the library. This spatial concept has been realised by building the library as an inhabited bridge, with two massive steel arches that span over 100 metres to create a fully enclosed, column-free public entrance space, clusters of rooms grouped around the structure, and the open-plan reading room carried above. Oodi has been built using local materials and with local climate conditions in mind. The timber façade is clad with 33-millimeter-thick Finnish spruce planks that conform to the sweeping curve that extends the building outwards to create a canopy above the Kansalaistori square, blending the interior and exterior spaces and creating shelter for public events in front of the library. 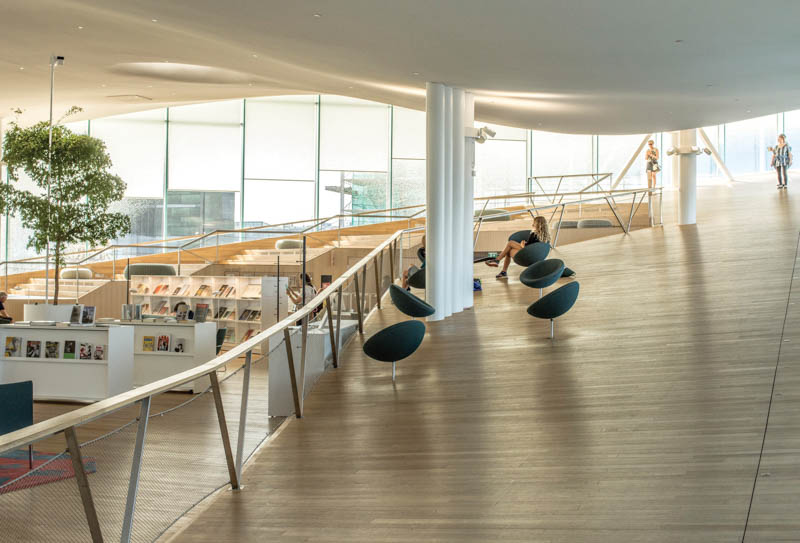 Books fill only one third of the space within the library. Photo by Henar Langa 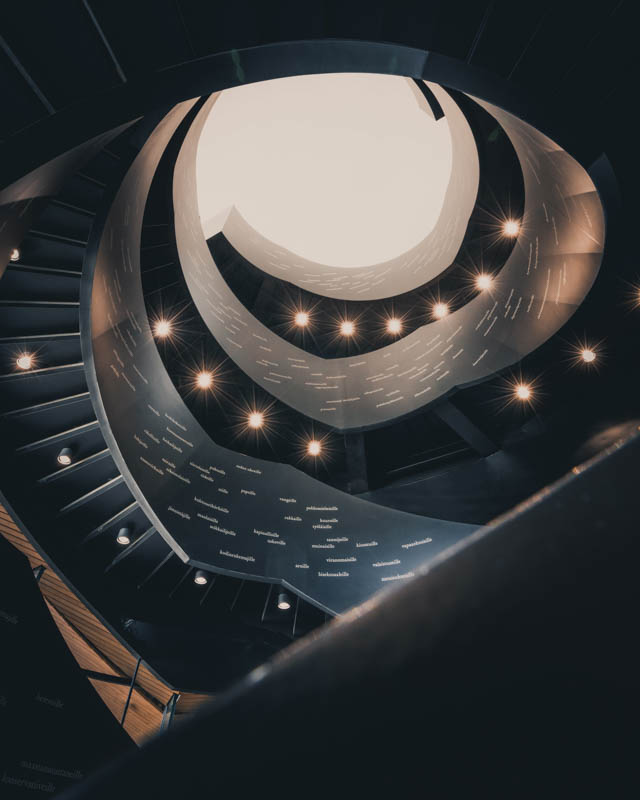 The design divides the functions of the library into three distinct levels. Photo by Mauri Karlin

The upper surface of the canopy structure has been used to create a large public terrace, from which Helsinki citizens can look directly over the square to the steps and main entrance of the Finnish parliament. The terrace doubles the amount of public outdoor space provided for library visitors and creates a new destination where people can meet and observe the city below. The ground floor of Oodi extends the Kansalaistori square into an interior public space. The purpose of the ground floor is to make each of the facilities of the library apparent and accessible and provide a non-commercial interior space open to all, every day of the week. Kino Regina, the National Audiovisual Institute’s movie theatre will occupy a space on the ground floor, together with a cafe restaurant with seating that will spill out onto the square in the summer months.

The middle floor, known as the ‘Attic’, consists of flexible rooms arranged around the intimate nooks and corners that inhabit the spaces between the trusses of the bridge structure. The multi-function rooms are designed to accommodate both noisy and quiet activities and it is on this floor that Oodi will offer facilities such as its makerspace and recording studios.

‘Book Heaven’ on the top floor, is a vast open landscape topped with an undulating cloud-like white ceiling punctured by circular rooflights. Here the best characteristics of the modernist library meet the possibilities provided by 21st Century technologies. The serene atmosphere invites visitors to read, learn, think and to enjoy themselves. From this level visitors can enjoy an unobstructed 360-degree panorama view of the city centre or step out onto the terrace overlooking Kansalaistori square. The timber façade is clad with 33-millimeter-thick Finnish spruce planks that conform to the sweeping curve that extends the building outwards to create a canopy above the Kansalaistori square. Photo by Vadim Morozov

Oodi’s spatial concept, based on three individual public floors, is executed by building the library as an inhabited, asymmetrical bridge spanning over 100 meters over the open ground floor space. The bridge structure consisting of steel trusses and beams is supported by two massive steel arches, tensioned together with a reinforced concrete tension slab. The innovative structural solution has enabled both the construction of the flexible column-free interior spaces and the possibility for the construction of a future road tunnel under the site. Secondary steel trusses support the cantilevering balcony and roof canopy asymmetrically from the arch structure, forming a unique structural design to accommodate both permanent and temporary functions for both the library and the public realm.

Oodi has been built using local materials and with local climate conditions in mind. The wooden façade is made from pre-fabricated elements. 33-millimeter-thick Finnish high-quality spruce has been used for the cladding. A specific grading and quality control system was developed for the timber, the sawing and the treatment of the slats. The complex curved geometry was designed and manufactured using algorithm-aided parametric 3D design methods in order to achieve the required precision. The appearance of the façade will develop over the years towards a deeper, richer version of its initial hue.

The design of the building envelope is intrinsic to the passive energy approach adopted by the project team. Detailed analysis of the façade performance has informed the environmental solutions and has allowed the team to minimise the requirement for mechanical environmental control systems, which facilitates the highly flexible architectural solution. The glass facades allow for large amounts of functional daylight in the public areas, reducing the use of artificial light and enhancing the quality of the interior spaces as a multifunctional citizen’s forum.