Architect Steven Paynter takes us behind the scenes and shares how an interdisciplinary team of experts developed a prototype for the world’s tallest net-zero timber building. 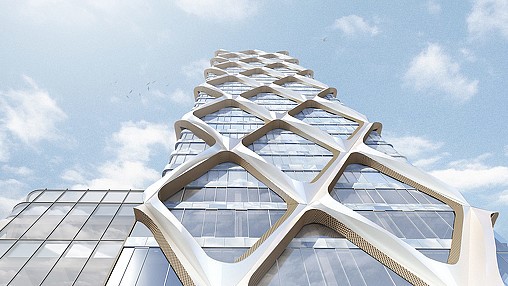 Historically, architecture is the only design industry that doesn’t build prototypes. That’s really because it would be so expensive. However, with new advancements in digital technology, we were able to build a full working digital mode of the 35-storey timber-tower prototype—Proto-Model X or known simply as PMX—that could be tested to its limits in the same way an auto manufacturer might build and test a concept car.

Building Information Modelling (BIM) and virtual design and construction (VDC) are really the tools that have made this prototyping possible. By designing a detailed virtual model and then constructing parts of that and testing it in the real world, we were able to establish what could be taken to market now and what needed more research and development.

PMX-35 is aiming to achieve ambitious targets around energy usage that set a pathway towards zero carbon emissions, in addition to higher standards for flood mitigation and use of resources. To achieve our ambitious goals, the team developed a physical kit of parts that includes working with Sidewalk Labs to produce standardised construction materials, and digital and robotic technology in order to support pre-fabrication locally. The project is designed so that all of the above grade structure and about 90% of the facade, mechanical, electrical, and plumbing system can be prefabricated offsite.

When it comes to cutting carbon in the built environment, one of the biggest opportunities is making mass timber mainstream. We need to shift from asking ‘why mass timber?’ to ‘why not mass timber?