An engineering marvel made of American white oak features in the redevelopment of the Warner Stand at one of the world’s most iconic sporting facilities, Lord’s Cricket Ground in St John’s Wood, London. 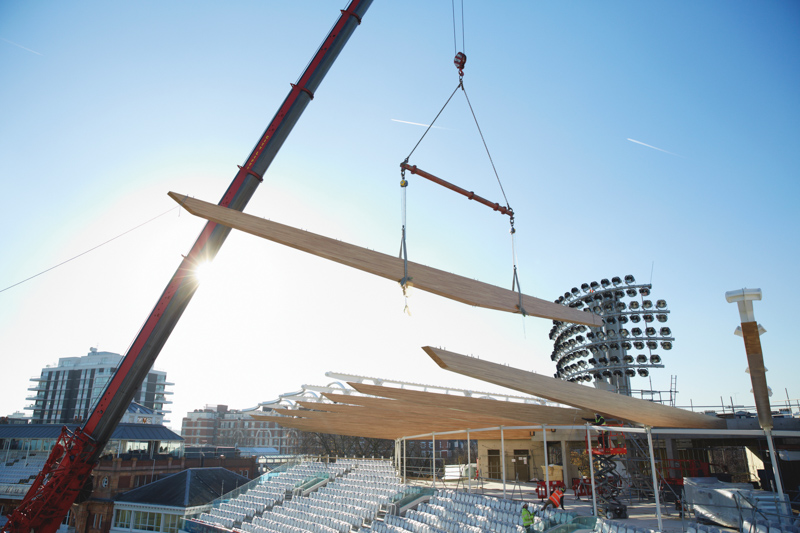 Each 4-tonne beam is carefully lifted into position for the construction. Image credit: Jon Cardwell

The Marylebone Cricket Club (MCC) commissioned architects Populous to design the new stand, which is part of an ongoing masterplan to improve visitor experience and boost the international reputation of world-renowned Lord’s.

In this pioneering project, the roof of the stand is formed from 11 cantilevered glue laminated (glulam) American white oak beams, manufactured in Germany by specialist timber fabricators Hess Timber, that radiate dramatically from the corner of the ground, paving the way for brave new structural uses of sustainable American hardwoods.

Each beam measures 900mm x 350mm at the deepest point. The longest glulam beam weighs approximately 4 tonnes and measures 23.4 metres in length, the same as 26 cricket bats lined up nose to tail. They are all covered by a lightweight fabric roof covering. The AHEC Grown in Seconds sustainability calculator shows that the 100mᶟ of American white oak lumber used to fabricate the beams will have taken 160 seconds to grow back in the American forest.

“The imagination of the architects, the inspiration of the engineers and the skill and tenacity of the fabricators has produced a landmark structure, which is a pivotal moment in the evolution of timber construction. This is also an exciting moment for us [AHEC], turning our vision of what might be possible structurally with our hardwoods, into a reality,” says David Venables, the European Director of the American Hardwood Export Council. 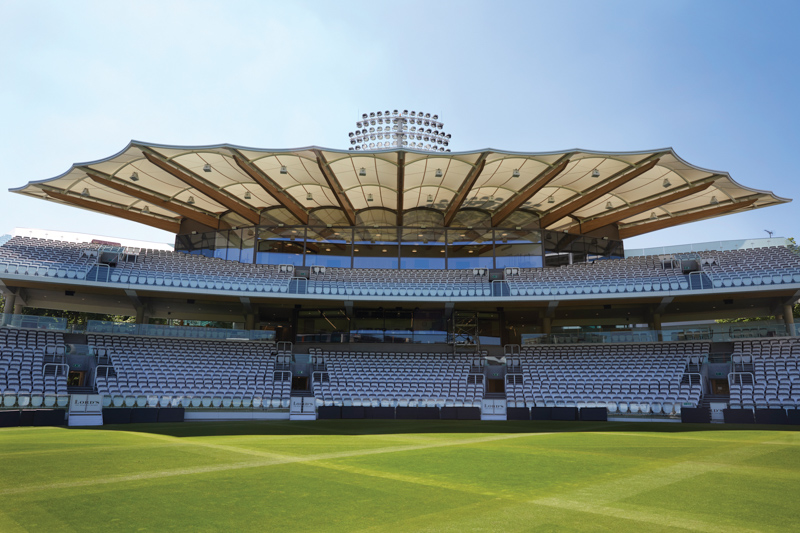 Natural wood and cricket cannot be separated. The use of willow for cricket bats and ash for the stumps is as much part of the game as the leather balls, the state of the pitch and of course the weather.

Populous chose to specify American white oak because it can be finely crafted, possesses a beautiful golden colour and is immensely strong. These characterful qualities make it the perfect choice for the structure of a new canopy roof at Lord’s,” said Philip Johnson, Senior Principal at Populous and Project Director.

“Another advantage of American white oak’s stiffness and uniformity was that we could predict deflection levels and camber very precisely,” pointed out Markus Golinski, head of sales at Hess Timber.

Will Whitby, Lead Structural Engineer at Arup, said: “Our work on the Warner Stand at Lord’s brings this historic sporting institution into the 21st century, whilst retaining the heritage look and feel. The improved sightlines and upgraded hospitality features combined with behind-the-scenes improvements to match-day facilities, have enhanced this famous establishment, ensuring the viewer experience now matches its reputation for world-class cricket.” 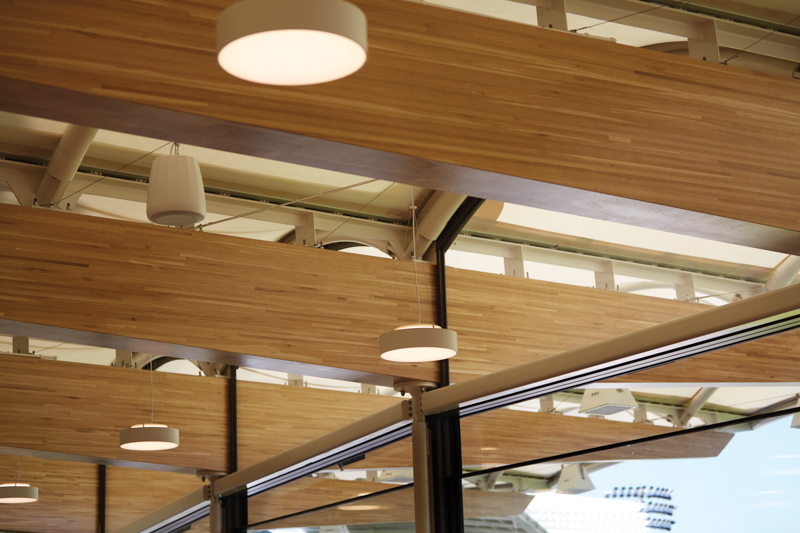 The golden colour of the American white oak brings warmth to the interior of the stand. Image credit: Jon Cardwell 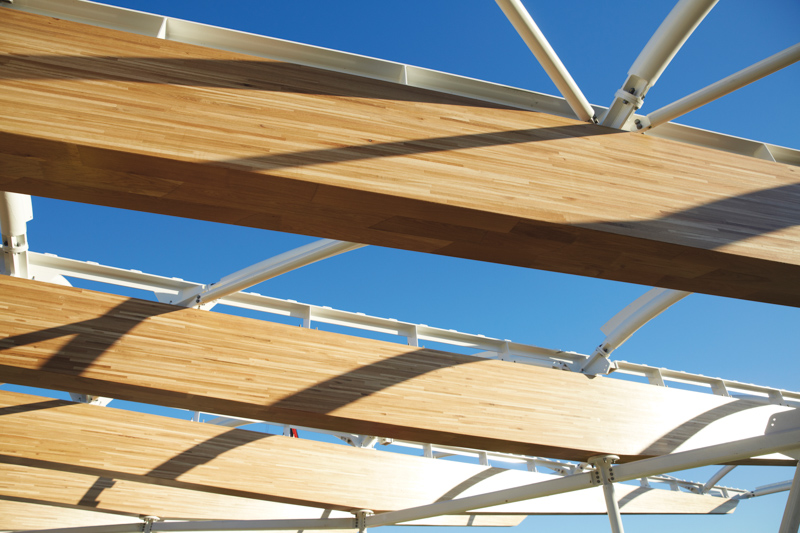 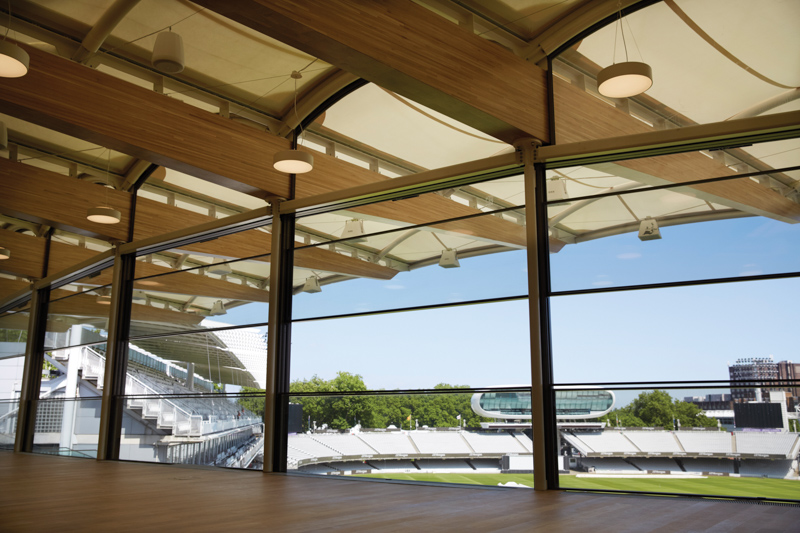 The 23.4-metre-long beams stretch across the stand, providing cover for the guests. Image credit: Jon Cardwell

The new development replaces a 1950s structure with a new four-storey stand that has been designed to significantly improve the view for spectators, whilst also exceeding best practice standards for accessibility so that it is fully inclusive. It will have 2 656 seats with improved sightlines, a new match control suite and better facilities including four bars and a restaurant on the top level.

The new building sits between the historic Grade II listed Pavilion, designed by architect Thomas Verity, and built in 1890, and the Grand Stand, designed by Nicholas Grimshaw and built in1996.

Spaces within the building include a state-of-the-art match control suite for officials and the emergency services, bars and other facilities for spectators, and a 135-cover restaurant with magnificent views over the ground.

Sustainability has also been at the forefront of the design thinking. Solar thermal and photovoltaic roof panels have been incorporated into the roof to generate hot water and electricity respectively. 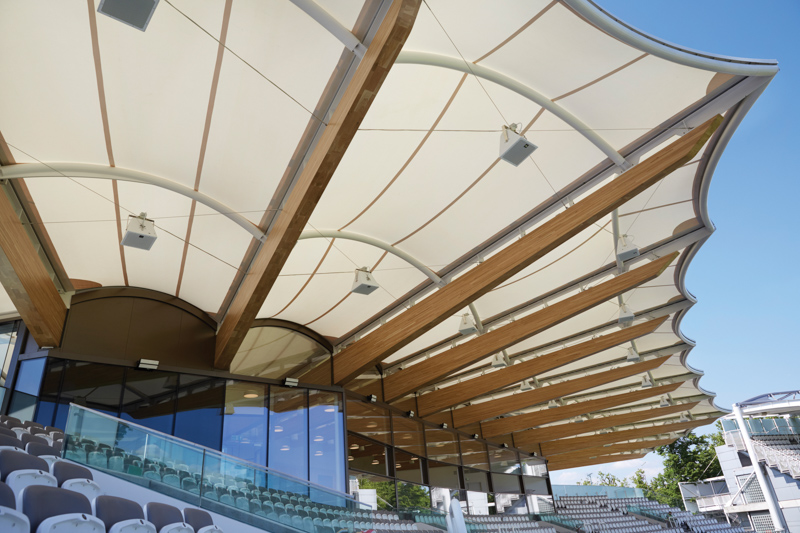 There is no other construction material that comes close to timber in its potential to positively impact the built environment. In both growth and use, timber acts as a carbon store making the use of timber a low carbon option; and the more we use the better.

The choice of American white oak for the glulam beams, which Arup had pioneered for the courtyard roof of Portcullis House in 2001, was driven by its excellent strength properties relative to its weight allowing the beams to be more slender than if they had been made from constructional softwood. It also increased their durability and offered a high-quality architectural finish.

In total, 100m3 of Number 1. Common grade American white oak was used to create the 11 beams in the new Warner Stand. It would take only 160 seconds for this material to be replaced through natural growth across the vast American forests.
About The Warner Stand and MCC
The new Warner Stand is the first phase of MCC’s ambitious masterplan-led redevelopment and is located in the western corner of Lord’s Cricket Ground.

Lord’s is not a traditional stadium, in the sense that the various stands that surround the pitch each have a separate identity that contribute to the character of the Ground. Inserting a new building with its own clear and confident identity into this existing ‘campus’ of buildings, without dominating the overall composition, has been the main architectural challenge for the project.

For over 20 years the American Hardwood Export Council (AHEC) has been at the forefront of wood promotion in Europe, successfully building a distinctive and creative brand for U.S. hardwoods. AHEC’s support for creative structural projects such as Timber Wave, Endless Stair, and The Smile, for the London Design Festival demonstrate the enormous potential for commercial structural applications. These sustainable materials will provide valuable inspiration to designers, structural engineers, and architects alike.

Populous is a global architecture and design firm that designs the places where people love to be together, like Yankee Stadium, the London Olympics, and the Super Bowl. Over the last 30 years, the firm has designed more than 2 000 projects worth USD40-billion across emerging and established markets. Populous’ comprehensive services include architecture, interior design, event planning and overlay, branded environments, wayfinding, and graphics, planning and urban design, landscape architecture, aviation and transport design, hotels and hospitality and sustainable design consulting. Populous has 17 offices on four continents with regional centres in London, Kansas City and Brisbane.

Arup is the creative force at the heart of many of the world’s most prominent projects in the built environment and across industry. The company offers a broad range of professional services that combine to make a real difference to our clients and the communities in which it works.

It is a truly global organisation. From 92 offices in 40 countries Arup’s 13 000 planners, designers, engineers, and consultants deliver innovative projects across the world with creativity and passion.

Founded in 1946 with an enduring set of values, our unique trust ownership fosters a distinctive culture and an intellectual independence that encourages collaborative working. This is reflected in everything Arup does, allowing the company to develop meaningful ideas, help shape agendas and deliver results that frequently surpass the expectations of clients.

The people at Arup are driven to find a better way and to deliver better solutions for their clients.