Vergelegen wine estate in Somerset West, which has won numerous awards for its commitment to sustainability and biodiversity, is testing a new concept in some of its vineyards – environmentally-friendly eucalyptus poles, which have not been chemically treated. 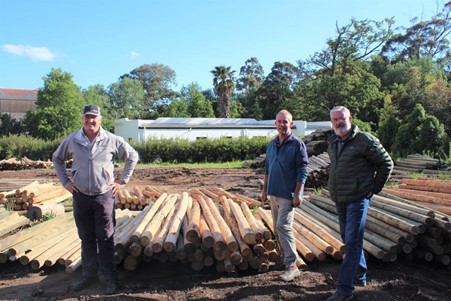 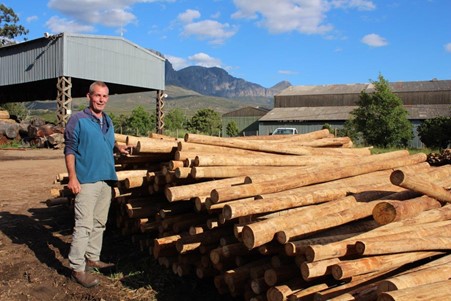 The untreated poles have been installed in two blocks of vineyards, extending over 3,55ha. These are planted with sauvignon blanc and semillon grapes, says Vergelegen viticulturist Rudolf Kriel. The remaining four blocks, planted in 2020, have steel poles in one block, and normal treated pine poles in the remainder. 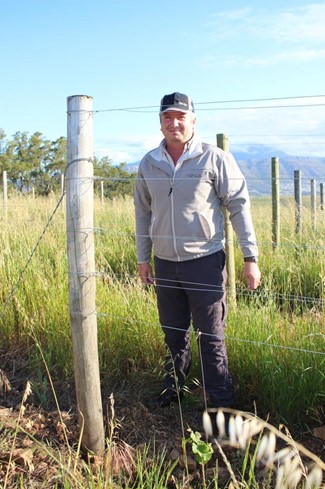 Green Cape Timbers, which is based at neighbouring Lourensford wine farm, manufactured and supplied the environmentally-friendly poles.

Green Cape Timbers owner Sean McGaffin says he became interested in environmentally-friendly timbers while exporting wood to the Netherlands. Dutch authorities fit wooden panels to the sides of canals and dykes, and this wood must be correctly certified as they do not allow treated timbers in their waterways.

The poles installed at Vergelegen are sourced from sugar gum, the traditional farm gum tree (E. cladocalyx) and tuart (E. gomphocephala). These eucalyptus species are commonly found on Western Cape farms as they are well-adapted, all-purpose trees. They also appeal to beekeepers as they provide a reliable source of pollen and sugar-rich nectar.

The poles are produced by felling the trees and, keeping the bark on, leaving them to release moisture slowly. The exterior sap-containing wood is then peeled off, and the eucalyptus is cross-cut to the required length.

McGaffin says the benefits of untreated eucalyptus poles include:

Enviro-friendly manufacture: The poles are not treated with wood preservatives, which require quantities of water and chemicals to produce.

Chemical-free: The untreated poles are free of chemicals that could leach into the soil. Poles used outdoors are usually impregnated with chromated copper arsenate (CCA) or creosote. CCA is a wood preservative containing chromium, copper, and arsenic compounds. Creosote is distilled from various tars and the pyrolysis (decomposition due to high temperatures) of plant-derived materials such as wood and fossil fuel.

Cheaper costs: Due to strength capabilities, the cost of the eucalyptus poles can be considerably cheaper than treated poles sourced from commercial retail outlets.

Community responsibility: Many treated, discarded poles are used as wood fuel for cooking in under-resourced communities. This has health concerns given that they contain heavy metals and arsenic.

“There is a general perception amongst South Africans that all eucalypt tree species in the country are aggressive, alien invasives,” says McGaffin. “This perception has been further fuelled by drought concerns and the blanket understanding that ‘gum trees’ use extensive amounts of underground water resources. In fact, this is not the case as they use no more than another tree per biomass size.”

There are over 180 eucalyptus species in South Africa, which means there are large variations in the levels of invasiveness, durability and strength, he says.

Stellenbosch University research has shown that some eucalyptus trees have four to five times the strength of treated pine poles, adds McGaffin. Thus, costs could be lowered by manufacturing thinner eucalyptus poles. Given that the poles are heavy, they could be supplied with holes already drilled for nails, while tapering them at the tips would enable easier planting. The peeled bark could also be sold as mulch.

Leslie Naidoo, Vergelegen Commercial and Risk Manager, says: “Vergelegen is dedicated to sustainability and has collaborated with research institutions and specialist suppliers of environmental products and services over several decades.

“We will accordingly monitor the condition of the untreated poles and any impact on the vineyards and look forward to sharing the findings in due course.”

Vergelegen has consistently been recognised for its environmental initiatives. The estate was crowned the first Biodiversity and Wine Initiative Champion in 2005 and completed South Africa’s largest privately funded alien vegetation clearing project in 2018. This programme restored 2 200 hectares of vegetation on the 321-year-old estate, while supporting job creation and skills development in local communities.

Timber intended for outdoor use is usually treated to protect it from microbes and insects. Thick sap wood, which does not have natural good durability and strength properties, is chosen because it allows the required chemical penetration. Traditionally in South Africa, eucalyptus grown for pole material has also been treated with CCA or creosote which requires a thick sap wood in order to get the required chemical penetration. In fact, the chemical treatment of many eucalyptus is unnecessary because of their natural durability. This has prejudiced species such as E. cloeziana that has thinner sap wood and better durability.

A recent study by Wessels et al (2016) into the viability of fast-growing tree species in the dry West Coast region of the Cape identified the four most promising genotypes by volume growth as E. grandis, E. camaldulensis, E. gomphocephala and E. cladocalyx. Source: https://link.springer.com/article/10.1007/s00107-016-1016-3

Green Cape Timbers, which forms part of a consortium known as Green Cape Forestry, is investigating the potential of not only supplying untreated gum poles, but also offering a turnkey service to plant and manage eucalyptus forests on behalf of landowners.

Eucalyptus trees play an important role in the agricultural sector. The trees bloom in different seasons and are important source of nectar and pollen for bees. Bees are essential for pollination of the Western Cape’s fruit industry. Currently, the bee population is suppressed by insecticides and is attacked by pests and diseases. According to SANBI (South African Biodiversity Institute), the value of insect pollination is more than R10.3-billion per year in South Africa.

The fruit industry in the Western Cape needs poles for orchards to ensure optimum production per hectare. It is estimated that 100 000m3 of poles are treated per year in the Western Cape, of which about 60% is destined for the fruit industry. The expected durability of a pole in the industry is about 25 years (a durability Class 1 product). To date, chemically treated poles have been used to create this lifetime expectation. Several Eucalyptus trees have a natural durability by removing the sapwood. Eucalyptus cladocalyx is one such species.

Exotic trees were first planted because indigenous forests were insufficient for timber supplies and there was a risk that indigenous forests would be over-exploited. The first eucalyptus species planted widely in South Africa was the E. globulus, the ‘blue gum’. It came via an Indian Ocean network, from Australia to Mauritius to the Cape Colony, probably in 1828. Unfortunately, the plantings were not managed, and an environmental management problem began to occur. Green Cape Forestry Consortium’s objective is to motivate new plantings that are managed and meet responsible forestry standards. This would help remove unwanted Eucalyptus stands and improve the Western Cape’s biodiversity status.