In Ivory Coast, the Special Surveillance and Intervention Brigade (BSSI) is waging a fierce battle against illegal logging. The unit set up by the Ivorian Ministry of Water and Forests has just arrested 11 people in possession of 6 000 logs from illegal logging. 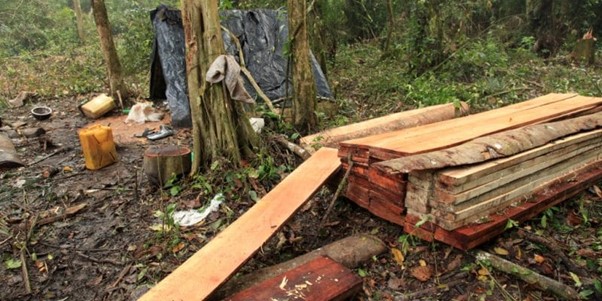 This is one of the record seizures of the Special Surveillance and Intervention Brigade (BSSI). The forest crime fighting unit, set up by the Ivorian Ministry of Water and Forests, carried out a major operation on January 5, 2022, in the council of Abobo, north of Abidjan (the economic capital of Ivory Coast). Alerted by a phone call from an anonymous person, BSSI officers arrested eleven people in possession of 6 000 planks of wood (very thick planks of wood) produced by custom sawing, proof that the origin of this wood is fraudulent.

In a note published following this intervention, the Ivorian Ministry of Water and Forests, Alain-Richard Donwahi, praised the good collaboration of the people who do not hesitate to alert the BSSI on suspicious cases of violation of the natural heritage of Ivory Coast, especially the gravediggers of the Ivorian forest.

After the big catch in Abobo, the BSSI continued its interventions for about a week, with the seizure of other products of illicit wood trafficking. On the night of January 9, 2022, in Divo (a council in the central-western part of Ivory Coast), a mission of the brigade seized more than 600 planks and rafters. One person was arrested. The following day, in the town of Bouaké in central Ivory Coast, a BSSI patrol intercepted a trailer-type truck carrying more than 2 000 boards from custom sawing. The series of arrests will end on Tuesday, January 11, 2022, with the seizure of approximately 700 Iroko gasoline planks. An operation conducted by a nautical crew of the BSSI, on patrol on the Ebrié Lagoon in Abidjan-Koumassi.