Located in Shoreditch, London, The Black & White Building is set to be London’s tallest engineered timber office building when it completes in summer 2022. 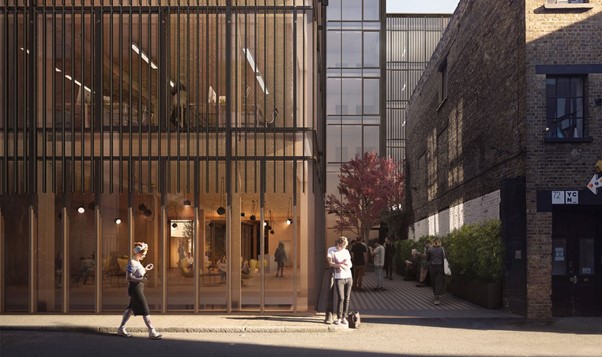 The timber shading fins that line the exterior of The Black & White Building tilt as they climb upwards, allowing for optimum heat and natural light throughout the workspace. The Office Group – TOG Work Spaces

Developed by The Office Group (TOG) and designed by Waugh Thistleton Architects, The Black & White Building is an exemplar of sustainable modern office design; offering flexible workspaces with a focus on health and wellbeing and a variety of creative work environments delivered in a warm, welcoming environment.

The Black & White Building sits within a conservation area in the creative and technology district of Rivington Street. Replacing a Victorian building of the same name that was originally built for furniture manufacturing before recently being developed and expanded by TOG, planning permission was granted to redevelop the site to deliver more than four times the floorspace in addition to outdoor and roof terrace spaces.

Making the most of a constrained plot, the new six-storey building showcases the strength, flexibility and carbon benefits of building with engineered timber.

The structure is made up of a cross-laminated timber (CLT) core, CLT floor slabs and BauBuche, a type of hardwood laminated veneer lumber (LVL) for the columns and beams.

BauBuche is less well known than another material commonly used for columns and beams, glulam. Manufactured from beech, it’s an engineered hardwood made up of thin layers rather than blocks and was chosen for its structural benefits. As it is stronger than CLT or glulam, beams can be smaller which results in less space taken up with the structure of the building. In addition, notches can be cut into BauBuche, which means that services can be inlaid into the beams, providing further space-saving benefits.

The frame for the building’s curtain wall is built from another engineered timber, Holz Schiller curtain walling supplied by James Latham, offering higher performance, stability, and quality than a non-engineered equivalent. Meanwhile louvres made from tulipwood add a beautiful and practical finish to the façade.

The rooftop terrace at The Black & White Building is an organic extension of the natural materials used inside. Image credit : The Office Group – TOG Work Spaces

The tulipwood shading fins were designed using digital parametric modelling and sun studies to track the movement of the sun. This digital analysis of environmental performance fed into the curtain wall design and as a result, the louvres get gradually deeper as they move higher up the building, allowing for optimum heat and light into the building at every level.

The carefully designed shading ensures much greater energy efficiency for the building occupier, TOG, helping to reduce the operational carbon generated by the building.

The use of exposed timber both internally and externally creates a warm, calming environment. The rooftop terrace extends the use of natural materials outside, softened with planting to provide a garden in the sky, while simultaneously offering stunning views across the capital.

Health and wellbeing are central to the design with the inclusion of a yoga studio which provides a calming space filled with natural light where members can relax and recharge. Meanwhile, 94 bike storage spaces together with on-site shower facilities encourage a healthy way to commute.

A focus on flexibility, re-use and circularity

With no structural internal partition walls, the building’s layout can be easily changed and adapted to suit the needs of TOG’s clients over time.

Meanwhile, with the long-term in mind, the timber frame has been designed to be taken apart and re-used at the end of its life. Internally, salvaged timber beams from the original Black & White Building have been used to create new sculptures by local artists.

The embodied carbon calculated for The Black & White Building is 256kg CO₂e/m² when taking into account the carbon sequestrated in the timber. (A1-A5 including sequestered).

This compares to 622kg CO₂e/m² embodied carbon if the building had been built from concrete.