Cyclone Batsirai is the second tropical storm to hit the island of Madagascar in less than two weeks. In the second week in February, Cyclone Batsirai hit with a wind speed of 165km/h and local gusts of 235km/h. After causing flooding across the country, destroying buildings and uprooting trees, the toll of this storm caused by global warming is 92 dead and 50 000 displaced.

This second disaster poured torrential rains for two days and caused flooding. A disaster that deprived the population of electricity and destroyed plantations, in this country where 83% of the population lives in rural areas according to the World Bank.

In the town of Mahanoro, located in the east where the Pangalanes canal is known for its important wildlife and floral potential, the waves of Batsirai have washed away part of the cemetery. The Malagasy meteorological services indicate that “the tropical cyclone Batsirai should soon emerge at sea in the Mozambique Channel in the northern part of Atsimo-Andrefana.”

A humanitarian response to food insecurity

Faced with the impact of the disaster on the environment and the daily life of the population, several organisations have provided their support to the Malagasy government in order to limit the damage and anticipate possible future risks. This is the case of the United Nations World Food Program (WFP), which has already mobilised 50 000 tons of basic necessities, including money, food, water, sanitation, and hygiene items, as well as health and protection services for people displaced by the floods.

In addition to this deployment, there is the support of Switzerland and its embassy on site. Three experts in water and sanitation are on mission in the disaster areas of the island. The team has a shipment of equipment for analysis, disinfection, and distribution of drinking water, worth more than EUR284 000. As a reminder, the Swiss Confederation had already released EUR1.9-million in 2021 to fight against food insecurity caused by the drought that has hit this East African country hard. 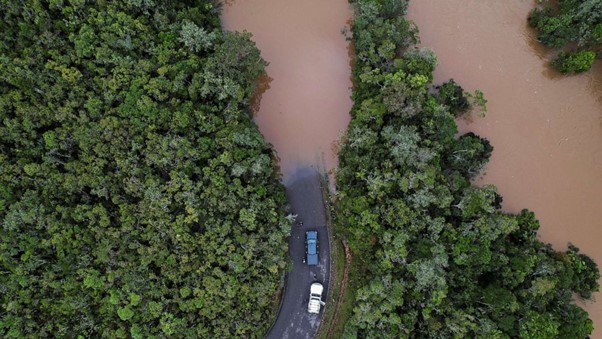 East Africa has become accustomed in recent years to a cyclone season from November to April. A period during which a dozen storms cross the southwest Indian Ocean, from east to west. In 2018, for example, the island of Madagascar has experienced two deadly storms including cyclones Ava and Eliakim that killed more than 70 people. According to the International Federation of Red Cross and Red Crescent Societies (IFRC), approximately 4.4 million people are at risk from the effects of these disasters in this country of 22 million people.

According to several experts, these tropical storms, and floods, which are increasingly intense, are linked to global warming, which makes the atmosphere more humid, and disrupts the rainy season, especially in the south of Madagascar, which has suffered from a prolonged drought in recent years.

At the African Union (AU) summit held in Ethiopia, at the time of the Batsirai affliction on the island of Madagascar, South African President Cyril Ramaphosa spoke of “the worst consequences of phenomena associated with global warming, such as droughts, floods and cyclones that affect African countries when they are not the cause.”

Read also: ANA: the human and environmental disaster of the storm in East Africa