A gift in American red oak

‘Cadeau’, the latest installation in the Powerhouse Museum architectural series, is a study of fine detail at scale

Occupying the Powerhouse’s central courtyard space in Ultimo, Cadeau is a natural presence against an industrial backdrop. Conceived pre-pandemic and selected from a number of different proposals, this structure demonstrates what can be achieved at the intersection of creative thinking, material capability and engineering expertise.

Newcastle based architects, Curious Practice, wanted to create an installation that stimulated public participation and involvement when completed. The challenge therefore was to design something that was beautiful, inviting and engaging but which met the safety requirements of a structure in a public space. Warren Haasnoot and Greg Lee from Curious Practice collaborated with Mike King and Nicky Shear, structural engineers from global building and engineering advisory ARUP.

“We got very involved workshopping ideas with Warren and Greg” says King. “We looked at the initial design and material properties of the timber used and also the practical aspects of the space”. Architect Warren Haasnoot welcomed the opportunity to work with the ARUP team: “We worked with ARUP to develop the connection details and fixings and structural integrity. It’s a structure that is very fine in detail and is at the limit of what can be achieved in terms of height and slenderness,” he says of the collaboration.

ARUP’s Nicky Shear spent considerable time and thought exploring how to ensure stability without compromising the delicacy of the design. “In the first iteration, Curious Practice did not have the deck element but did have these tall, slender structures. That was one of the big things we worked on. Incorporating a deck that didn’t stick out in the structure but was quite critical in spreading the load and making it wide at the base without being obvious”. The installation is provided with added stability through sandstone boulders. “It has such light and tall elements we were conscious of the effect of even a minimal wind load,” says King. “We have a wind expert in our office and we looked at how we could bring everything to an absolute minimum and still be safe. We couldn’t anchor it into the ground so were thinking about how to hold it down. You could use tanks of water, boxes of sand but we wanted something easily constructed and dismantled. We settled on boulders and Nicky calculated the necessary mass of each one. Warren and Greg then went to a quarry to select ones of the correct size. We had a bit of fun with that. They look like parts of the installation but are in fact critical parts of the structure”. 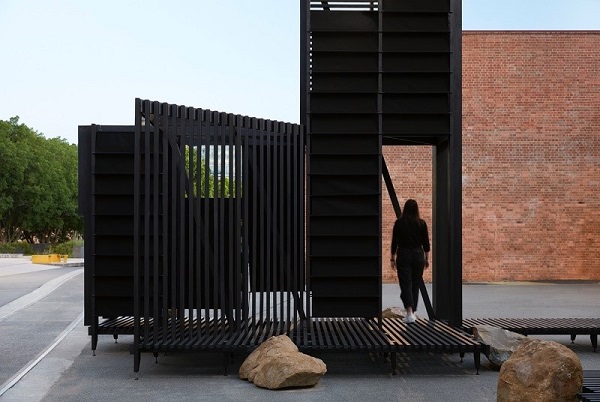 American red oak, supplied by Australian Sustainable Hardwoods (ASH) was specified for this project. Some American hardwood species have a strength to weight ratio that is similar to steel. “The nice thing about it is that you can still have relatively small members and keep the structure quite fine, provided you detail it in such a way to make full use of the footprint,” says King. “Timber of this sort is such a tactile thing and lends itself to the craftsmanship of smaller industrial processes. It’s not someone with a welder using massive amounts of electricity…where every part of the process is dirty. Timber has this beautiful richness at every step of the process. It feels natural, is natural and smells natural. Timber has a beauty that draws people in and you can see why people feel so positive about living and working in timber buildings. It has that natural thing that calms.”

Given the recent wet weather conditions in Sydney, the durability of a timber structure was rightly questioned. “We were really keen to maintain the natural timber,” says Haasnoot. “We found a product called Rubio wood cream. It’s a single coat application which repels water, so even when I was there today [and it had been very wet] there were just beads of water sitting on the surface. We were concerned about the moisture where the finger joints are and were concerned that if the water gets in there then it might split the timber but it’s passed the test” he adds. American red oak accepts stain very well given the cell structure of the material. Haasnoot says of the decision to stain the installation: “We didn’t want it to go that orangey colour that can sometimes happen when you coat timber and we think the black holds the grain really beautifully. The light catches the grain and the red oak is fully expressed”.

American red oak, supplied by ASH, is the most abundant species in the American hardwood forest and now widely used in Australia. Like all American hardwoods, red oak grows in sustainably-managed forests in the US. Such is the sophistication of the forest monitoring by the USDA Forest Service, the environmental impact of each and every shipment can be calculated and an American Hardwood Environmental Profile (AHEP) produced. The timber stores massive amounts of carbon, and the efficient harvesting, processing and shipping means that the wood arrives on Australian shores carbon negative. Furthermore, each year growth outstrips harvest and the growing stock of the American hardwood resource continues to increase.

The resulting structure is a delight in so many ways. Clearly a fulfilling process for the engineers and architects, both agreeing that few projects are as rewarding as those that are for public enjoyment. “You can be so used to working on a computer or seeing things in a particular way that you are not entirely sure what the presence of it will be when it’s revealed and how it might be perceived by the public,” says Haasnoot, “we’re really happy with it, today some kids walked straight up to it and played on it and walked through it which was great to see”. King agrees: “Of all the projects, the best ones are the public ones. There is a delight in the public interacting and responding to a space and thinking about how it contributes to their everyday experience and knowing it’s there for people to enjoy”.

Cadeau is a gift to the community that its name promised it would be.