Wood in the good old days of mining

The use of timber in mining dates back to the golden days with discovery of gold, coal and other minerals. Timber was predominantly used as pillars in underground mines to support mines from caving in – Timber iQ unpacks its various uses in the mining industry.

An article by MU Ozbay, JA Ryder and AJ Jager titled ‘The design of pillar systems as practised in shallow hard-rock tabular mines in South Africa’, explains that pillars have been used as stopes since the early days of mining.

This article appeared in The Journal of The South African Institute of Mining and Metallurgy (SAIMM), where the authors give a technical overview where they explain that the need to use pillars in a mine is determined by prevailing considerations of rock mechanics at shallow depths. An example of such mechanics are large tensile stresses in the hanging wall and geological weaknesses in the hanging wall rock mass. 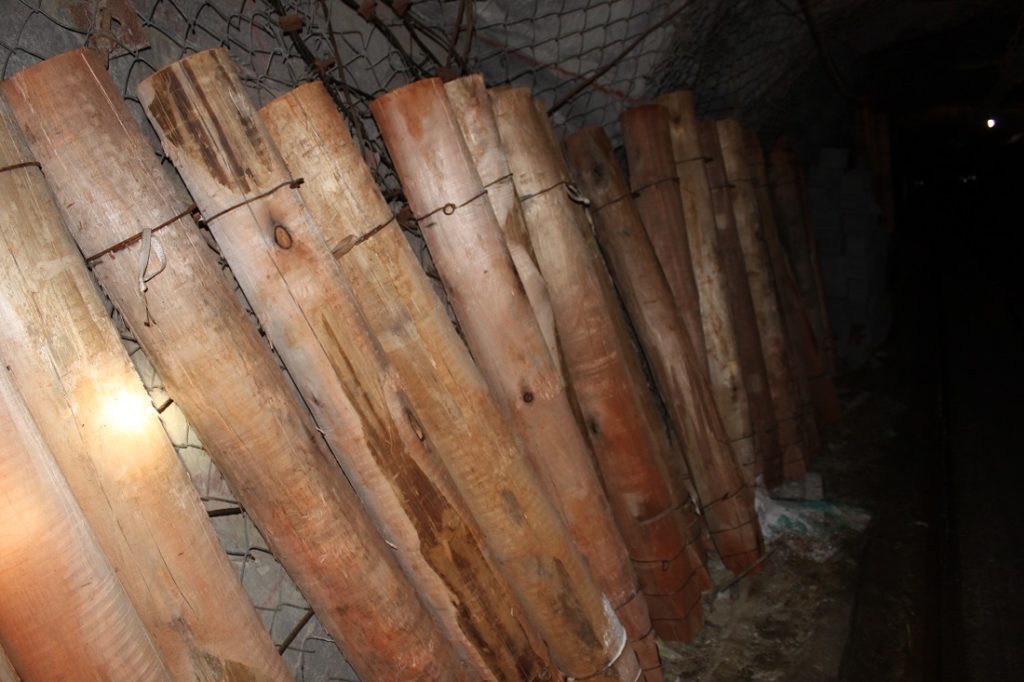 Round timber poles are used for upright support in an underground mine.

In coal mining, timber is used as a support measure for an open coal seam. This is according to Robert Knutron in his article, ‘A look at the mine timber market in the Appalachian Bituminous Coal Region’. ‘For this purpose, round, split, and sawed timbers are used,’ the article reads.

Knutron distinguished between two types of timber and their different functions, first there is the round and split timbers which, according to Knutron, are generally used for upright supports. The second type is sawed timbers which are primarily used for horizontal supports, mainly headers and half-headers. In his article Knutron also mentions additional uses of timber in an underground coal mine which includes mine ties, floor planking, wedges, crib blocks, construction and repair as well as other smaller uses.

Knutron adds that as that as the coal is extracted from the coal seam, roof support timbers are set. Depending on the mine or area in the mine, mine ties will be laid, and the flooring extended, all of which use timber. It is important to note that different mines may have different timber requirements because of the different mining methods they may employ. For example, a mine using a rail system for hauling will require wooden mine ties, whereas a mine using a conveyor for hauling does not. 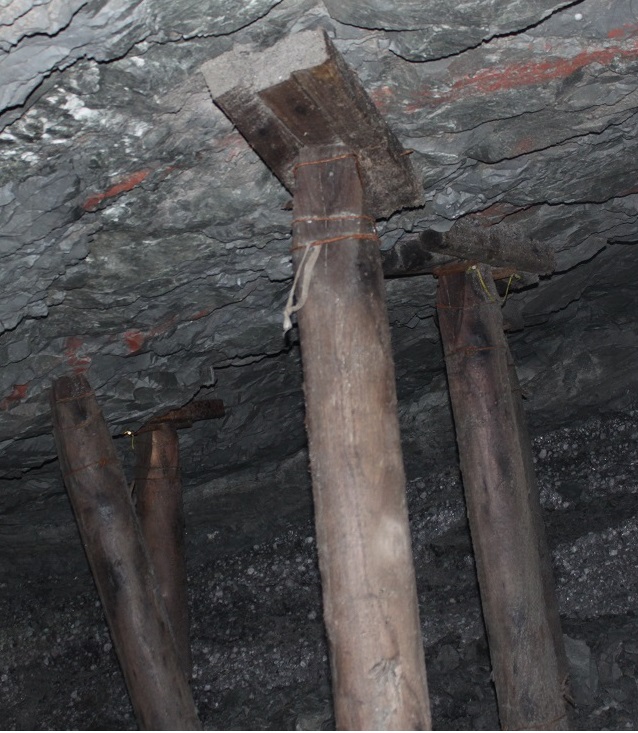 Timber is mostly used to provide roof support in an underground mine.

Underground mining is a dangerous in its nature and as a result, it is important that the timber used, regardless of the application, is up to standard and meets certain specifications. Knutron outlines three main specifications. Firstly, the timber has to be suitable for the intended use in the mine; it has to be manufactured to the correct standards and it needs to be structurally sound. ‘Most mine timbers are used to support the mine roof. Therefore, strength qualities are most important in mine timbers. Other qualities such as durability, elasticity, and ease of construction are also important,’ he writes.

Treating timber is important to ensure that the timber lasts for as long as possible. This is not only applicable in timber construction, but also in timber used for mining. Knutron points out that the number of times the timber is treated usually depends on the expected life of a particular mine.

There are many different timbers available on the market, with some being a better choice for certain applications than others. In the case for timber in mining, Knutron’s article highlights that red oak, yellow poplar, basswood and cucumber are among the prominent choices for timber used in mining. He adds that the choice of timber is usually driven by the availability of timber in the local area close to the mine.

Although timber in mining is predominantly used in underground mines, there are uses for timber in surface mining operations as well.

According to Robert Stone, Christopher Risbrudt and James Howard, timber is used for temporary building, props and blocking as well as other miscellaneous applications in surface mining operations. The three individuals coauthored the article ‘Wood products use by coal mines’, in which they broke down the different categories of timber products in underground coal mines. The article was published by the forest products journal and stresses the importance of wood in the coal mining industry.

‘Coal cannot be mined from underground without supporting the roof and often the sides of the mining shafts. For this use, wood is a valuable resource,’ the article reads.

The first one is a round prop which has the main purpose of supporting mine roofs. The article describes how the prop is loaded in a perpendicular angle to the roof and the floor to achieve maximum strength. ‘Props are used in faces, mine entries, and along haulage corridors,’ the article explains. 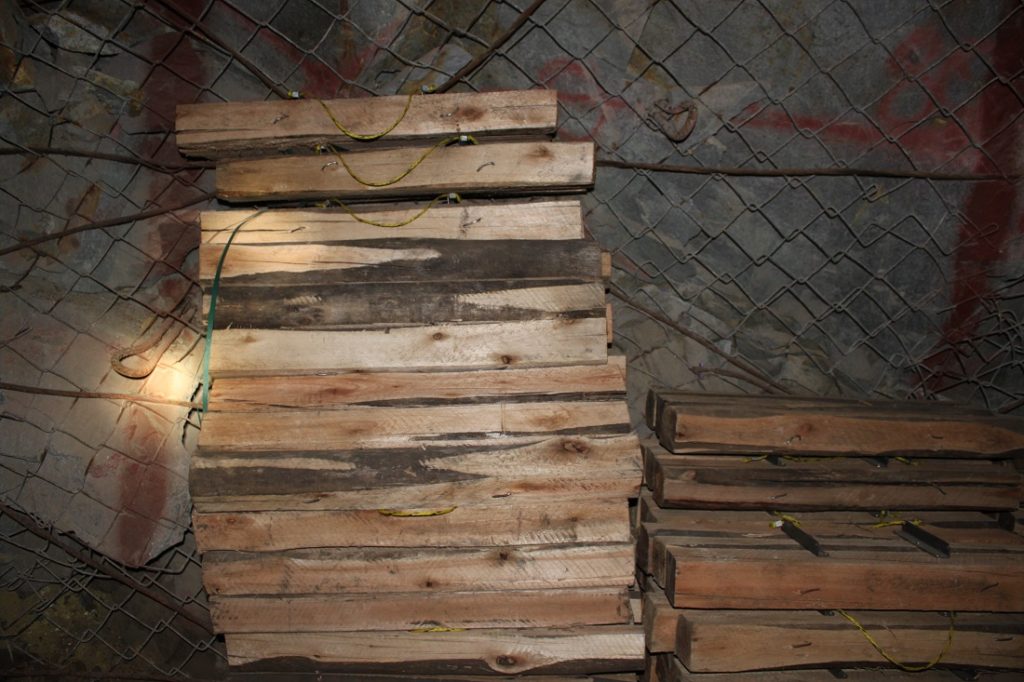 Next it describes sawn props, which have a similar purpose to round props. The difference is that they have more of a permanent function in that they are often set in mine corridors for up to 10
years. They are also the main preference for mines because they are not complicated and easy to use. When explaining the split props, the article mentioned that they would normally conform to the same standards as round props. Depending on the original diameter, spilt props are halved or quartered. This makes them versatile enough to be used for other functions such as wheel chocking and lagging. According to the three authors, lagging is described as having similar dimensions to planks which are used for shoring sides of mine entries, shafts and haulage ways. Lagging can be stacked in two ways: lengthwise or crosswise on top of crossbars for roof support.

Another category of timber product is a header which functions as a bearing surface against mine roofs. Also known as caps, headers are ‘conventionally mounted in props to fill gaps and tighten the wood structure into the mine roof’. The article highlights that headers can be replaced by metal.

Some timber products serve more of a support function and are used together with other timber products. Crossbars are an example of supporting timber products, where they are usually used along with props and headers. ‘They help support the mine roof by spanning two parallel mining props,’ the article states.

The article also mentions that it is possible to rehabilitate some wood products for other uses as well. For example, ties which can be used for railway support, but also provide a large bearing surface against a soft or muddy surface. In addition, after being rehabilitated, ties can also be sawn and sacked similar to crib blocks and be used for pillar support.

The last timber product described by the journal is a wedge which is described as a pie-shaped wood slab. Typically, the slabs are sawn at the mill and then wedged on top of headers to tighten the props to the mine roof. ‘Coal mines keep a large supply of wedges on hand since they can be used for any purpose requiring tightening or blocking of a support structure,’ the article says.