Efforts at promoting timber as an economical and sustainable building material in South Africa, are gaining momentum, and universities in the country are playing a leading role, writes Leon Louw. 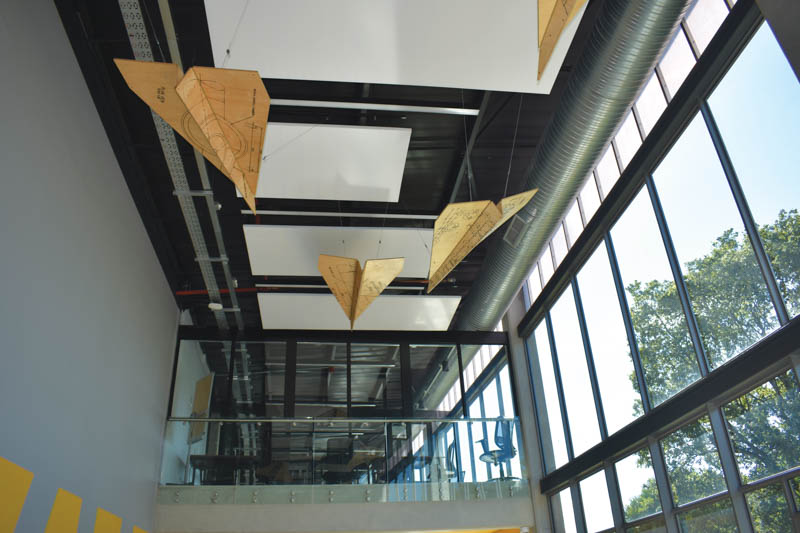 Dedicated artworks have been installed inside the main building. Photo by ©Leon Louw

The Department of Trade, Industry and Competition’s (dtic) renewed drive to create demand for timber as a viable building material comes at the perfect time for the construction sector in South Africa. With a huge backlog of housing in South Africa, timber has the potential to play a critical role as a construction material in tandem with traditional bricks and mortar. This does not mean that timber should only be used for roof trusses or window frames, though.

With international trends and technology such as Cross Laminated Timber (CLT) and Laminated Veneer Lumber (LVL), timber should be recognised as a primary construction material on par with steel, concrete and cement. Moreover, its use should not be limited to affordable housing. CLT, LVL and other timber products are used across the world in amazing designs and even in multi-storey buildings, and there is no reason this should not happen in South Africa.

“There are a lot of perceptions about timber that need to change if timber is to become an accepted building material in South Africa.” 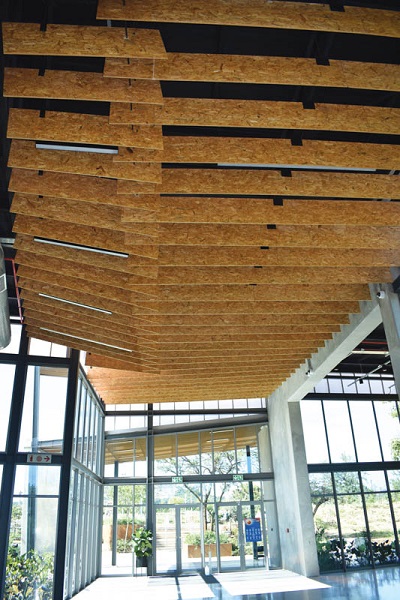 At the forefront of innovation

Timber iQ recently visited the University of Pretoria’s (UP) state-of-the-art Engineering 4.0 facility, which focuses on research on smart transport, cities, and infrastructure.

In a significant move and to emphasise the increased importance of timber in the South African engineering space, UP and York Timbers, created the York Wood Engineering Laboratory, which now stands alongside a concrete laboratory, a National Roads Reference Laboratory, and an Accelerated Pavement Testing (APT) Track, at the forefront of innovation and new technology in engineering.

According to Professor Wynand Steyn, Head of the Department of Civil Engineering at UP, there is a long research relationship between York Timbers and the University of Pretoria. “In the past, this relationship was focused specifically on tree science, with the main goal being how to grow better timber. However, the historic partnership was between York Timbers and the UP’s Forestry and Agricultural Biotechnology Institute (FABI). Discussions about incorporating the timber unit as part of the engineering facility only started in 2019. We had a timber section in the engineering department for many years, but that unit was focused on general timber structures. There was no direct link between FABI and the engineering department, and no consistent and meaningful research that connected plant science and engineering,” says Prof Steyn.

However, in 2019, York Timbers indicated that they would like to regenerate the use of engineered structural timber in the country. “We started those discussions in early 2019 and eventually established the York Timbers Structural Engineering Laboratory. Part of the talks and Memorandum of Understanding (MoU) were around incorporating a research chair in structural engineered timber specifically looking at those aspects of timber, and very importantly, supporting a number of research project linking all these aspects,” adds Prof Steyn.

According to Prof Steyn, there are a lot of perceptions about timber that need to change if timber is to become an accepted building material in South Africa. “Timber is not part of the South African culture. We do not have high-quality timber buildings and that is part of the problem. Showing South Africans through practical examples of what is possible, will go a long way in creating demand for timber houses,” says Prof Steyn.

According to Schalk Grobbelaar, senior lecturer at UP’s Department of Engineering and Technology Management, and previously employed with York Timbers, the market cannot be developed without production capacity, but there can also not be any production if there is no market. “This remains the major constraint for the timber industry in South Africa and it is one of the aspects that the University Chair will look at in its future research,” Grobbelaar tells Timber iQ.

According to Grobbelaar, there should be a specific focus on the development of a market for CLT, LVL and other mass timber products. “This is one of the reasons why the Chair at the University was established,” says Grobbelaar. The Chair will have a multi-disciplinary approach and one of the main aims is to develop mass timber and to carry out research on wood manufacturing in South Africa. The research will include the forestry process all the way through to the final product.

“A wide spectrum of research will be done under the Chair, but the main idea in the end is to develop mass timber in South Africa. To do this we need to understand and research the strength characteristics of timber and the wide variety of products that are being developed. At the same time, we need to concentrate on education and developing educational material for civil engineering and architect graduates. Education and research will be extremely important, as will the development of standards. South Africa, unlike other countries in the world, has limited standards to work with timber and we need to grow our own set of standards,” says Grobbelaar. 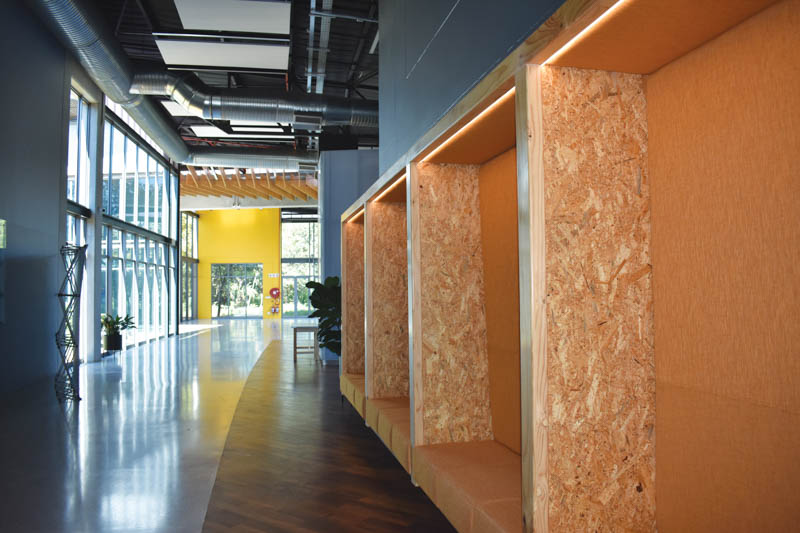 The Engineering 4.0 Complex includes wide, open social areas, both inside the facility and in the surrounding natural forest areas. Photo by ©Leon Louw 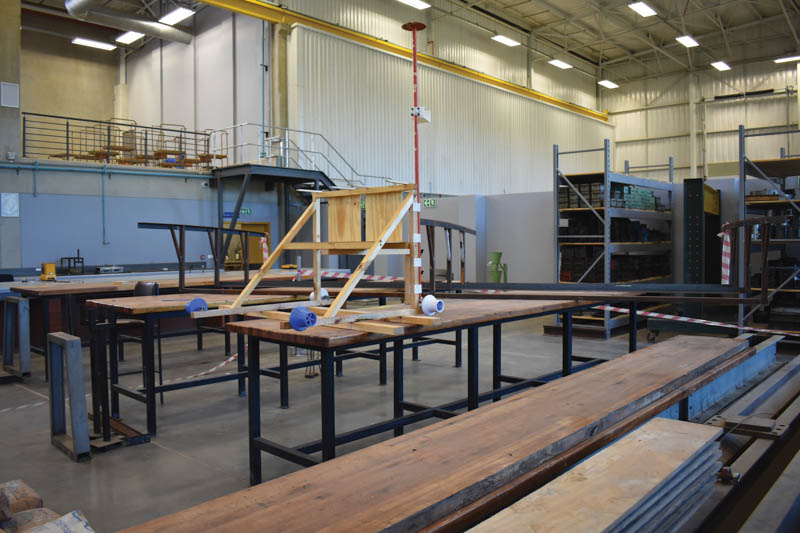 Timber has a prominent presence at the University of Pretoria’s engineering 4.0 facility. Photo by ©Leon Louw

In a post-Covid-19 world, where sustainability and climate change will be top of mind for most, timber products will remain popular. Timber technologies like CLT and LVL are already trending around the globe and have now arrived on South African shores. In countries like Canada, the US, Europe and Australia, timber materials have long been part of the sustainability and climate change debate. It has not been the same in South Africa, where any timber structure is still regarded by most people as inferior.

“The innovation and market development initiatives by the dtic are encouraging. Although still in its initial stages, at least there is some momentum. Government policy was not aligned with industry for a long time, which made it difficult, but at least that has changed now.”

Despite several significant challenges facing the timber industry, he remains optimistic about the future of timber in South Africa though. “The innovation and market development initiatives by the dtic are encouraging. Although still in its initial stages, at least there is some momentum. Government policy was not aligned with industry for a long time, which made it difficult, but at least that has changed now. In the sawmilling sector we need one or two companies to take the lead and show the industry what impact innovation can have, and the rest will follow. The step that York Timbers took to sponsor a research Chair at UP was a strategic decision that will increase competitiveness,” he adds.

As South Africa moves into a new normal, timber construction will have to form part of the conversation when it comes to affordable housing. The benefits of building with timber are well-known and well-researched but still not embraced by the general South African population. The current efforts by Universities, the timber industry and government, needs to be supported and promoted to create a vibrant timber sector in South Africa.